Atletico vs Man Utd – On Wednesday, Atletico Madrid will play Manchester United at the Wanda Metropolitano in the first leg of their Champions League Round of 16 ties.

This season, Atletico Madrid has been uncharacteristically uneven. They have the joint-worst defensive record in La Liga, which is a far cry from how Diego Simeone’s Rojiblancos have consistently performed. In all competitions, they have lost seven of their last 14 games.

Last week, Simeone’s side suffered a stunning setback to Levante, but over the weekend, they defeated Osasuna 3-0. Despite the result indicating a huge victory, Atletico Madrid was on the backfoot for the majority of the match. In comparison to Atletico Madrid, Osasuna had 63 percent possession and had 14 shots to Atletico Madrid’s five.

Atletico Madrid has just about made it through to the Champions League knockout stages. They lost three of their six group stage matches, but won their last group stage encounter 3-1 against Porto to save their season.

Lately, Ralf Rangnick’s team has struggled to convert their chances. They’ve been able to create plenty of chances in recent games, but their terrible finishing has let them down on several occasions. Manchester United, on the other hand, has shown indications of improvement in recent games against Brighton and Leeds.

Right now, Paul Pogba, Bruno Fernandes, and Jadon Sancho are in excellent form. Rangnick will be hoping that the trio is on top of their games when they face Atletico Madrid on Wednesday.

After suffering a muscle injury against Real Madrid in December, he has been racing against time to recover in time for the first leg at the Wanda Metropolitano on Wednesday.

The French international experienced a recurrence of the ailment in Atleti’s 3-0 win against Osasuna in the Copa del Rey, but he is close to a full recovery after being deemed well enough for the bench.

The return of their leading striker in this season’s European competition for their first knockout match against United is a nice boost for the Spanish champions.

Ralf Rangnick, the manager of Manchester United, has a number of important decisions to make ahead of Wednesday’s Champions League last-16 first leg against Atletico Madrid.

Edinson Cavani (groin) and Eric Bailly (ankle) may return to the squad, while Mason Greenwood (club suspension) is out, and Tom Heaton (groin) is doubtful to play.

Both Aaron Wan-Bissaka and Victor Lindelof began the 4-2 Premier League win over Leeds United on Sunday, but the duo could be dropped for this encounter, with Diogo Dalot and Raphael Varane anticipated to start with Harry Maguire and Luke Shaw.

Fred came off the bench to score against Leeds and is in contention to start, but Paul Pogba has impressed since returning from injury and might partner Scott McTominay in the midfield.

For the visitors, Bruno Fernandes and Cristiano Ronaldo are certain starters, while Jadon Sancho, who had two assists at Elland Road on Sunday, will play on the left. 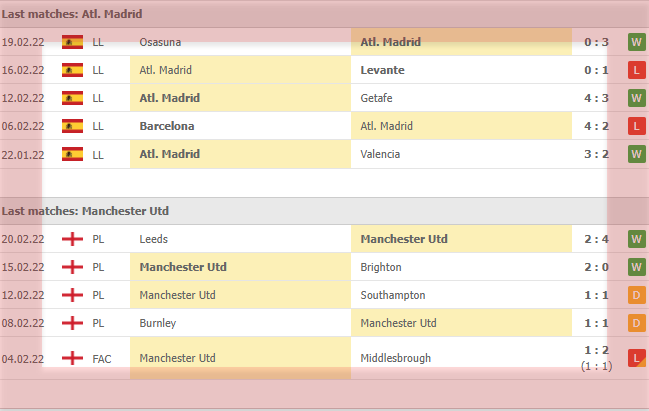