Atletico MG vs Independiente del Valle –  This Libertadores season has started well for Atletico MG. They were successful in keeping it going. None of their opponents in Group D had a better start than they do. As a result, they sit atop the table with a total of 8 points earned through undefeated performances.

In their most recent Libertadores match, Atletico MG defeated America MG 1-2 on the road. With the victory, they have now gone four games without losing in the competition. They’ll be trying for a fifth straight win.

In the meantime, Independiente del Velle has had an average season thus far. Their records are erratic. They were unable to keep their unblemished start to the season intact. As a result, they are currently ranked third in Group D. They are four points ahead of America MG in the standings.

In their most recent Libertadores match, Independiente del Velle lost 1-0 on the road to Tolima. With that loss, they have now gone three games without a win in the tournament. They will be hoping to improve their situation. Atletico MG has been playing well at home recently. They have won seven of their last ten home games in all competitions. So far this season, their sole Libertadores match at this site has finished in a 1-1 draw.

Independiente del Velle, on the other hand, has had an ordinary road season recently. In all competitions, they have lost two of their last five away games. One of such bad performances came against Tolima in a Libertadores group match.

Based on the information presented above, we believe Atletico MG will defeat Independient del Velle in a Libertadores match on Tuesday. 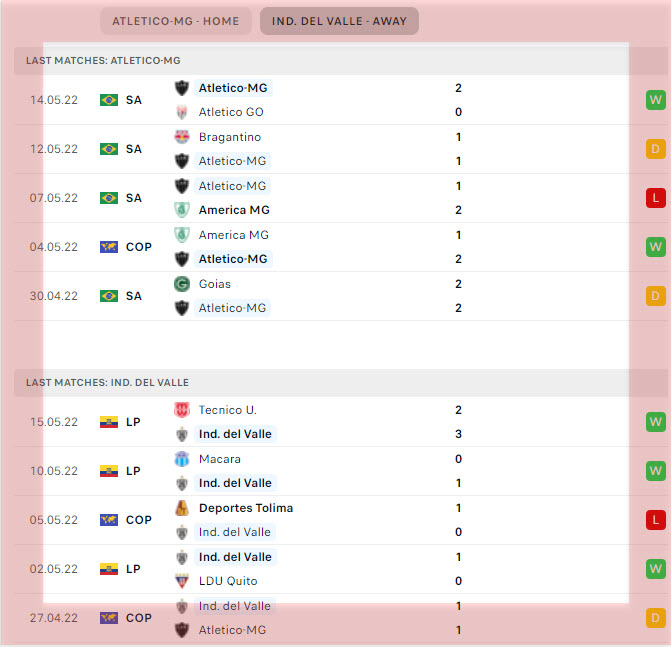