Atletico Madrid vs FC Porto – After a 1-1 draw in La Liga against Real Sociedad, Atlético Madrid will take the field in this contest.

Atlético Madrid had 45% of the game’s possession and 7 of its 16 shots on goal were successful. Lvaro Morata of Atlético Madrid scored the goal (5′).

Real Sociedad, their opponents, had 12 shots on goal with 5 of them being successful. Real Sociedad received a goal from Umar Sadiq (55′).

In their previous six games, Atlético Madrid under Diego Simeone have scored eight goals. In comparison, five goals have been scored against them over that period.

Porto will enter the encounter riding a 0-2 win in the Primeira Liga and the defeat of Gil Vicente in their most recent game.

Porto enjoyed a 61% possession advantage and 4 of its 16 efforts on goal were successful. Mehdi Taremi and Galeno both scored for Porto in the 41st and 44th minutes, respectively.

Gil Vicente, on the other hand, had 6 shots total, only 2 of which were on goal. Porto has scored 15 goals in the last six meetings between the two teams.

On each of those occasions, Porto has also scored. They have allowed 4 goals to go into their own net throughout that time.

Reviewing their most recent meetings, which date back to September 30, 2009, we see that Atlético Madrid has won three of them, Porto has won two, and there have been one draw.

In total, 14 goals were scored between the two teams during those games, with Atleti scoring 7 and Drages scoring 7. That equals 2.33 goals per game on average.

The Champions League Match Day 6 game between these clubs took place on December 7, 2021, and the final score was Porto 1-3 Atlético Madrid.

Porto enjoyed 68% possession on that particular day and made 14 attempts at goal, scoring on six of them. Sérgio Oliveira scored the goal (96′).

Seven of the 13 efforts on goal for Atlético Madrid were on target. The goals came from Rodrigo De Paul (92′), Antoine Griezmann (56′), and Angel Correa.

Diego Simeone, the manager of Atlético Madrid, is able to select from a fully healthy group and has no fitness concerns whatsoever for this match.

There is only one fitness concern for Porto head coach Sérgio Conceiço in an otherwise fully healthy group. The absence of Marko Grujic (Unknown Injury) from this game. 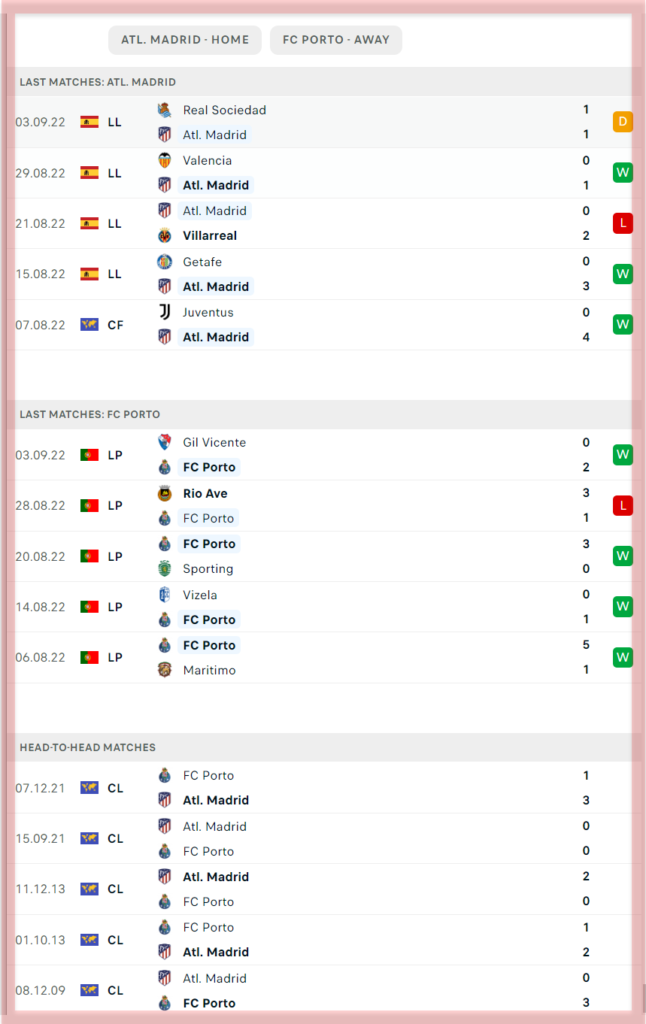