It would be unthinkable for them not to qualify for the next Champions League, especially after reaching the quarter-finals of the current edition.

Their chances of finishing in the top four are jeopardized by Betis and Sociedad, who are both in excellent form. Espanyol, who were promoted to the top flight at the end of the previous season, are comfortably mid-table.

They can play without any pressure. However, Diego Simeone’s men are determined to win this game. They have nothing to fight for this season after Manchester City eliminated them from the CL.

Both teams will be tested this weekend, but the defending champions are favorites to win at home. In the latest match, Atleti won 1-2.

They’ve won three of their last five. They had scored twice in their previous three meetings. The hosts had won their last match 3-1 here.

Last weekend, Atleti lost 1-0 to Mallorca. It was mainly due to their two Champions League games against Manchester City.

They can now focus on the league after finishing the CL campaign. They had won three of their previous four home games and were unbeaten in 17 of their last 22.

However, Espanyol did win 1-0 at home against Celta Vigo last week. They had lost 11 of their previous 14 games overall, and seven of those losses came on the road. Given these facts and previous h2h results, Atleti should win this weekend at home. 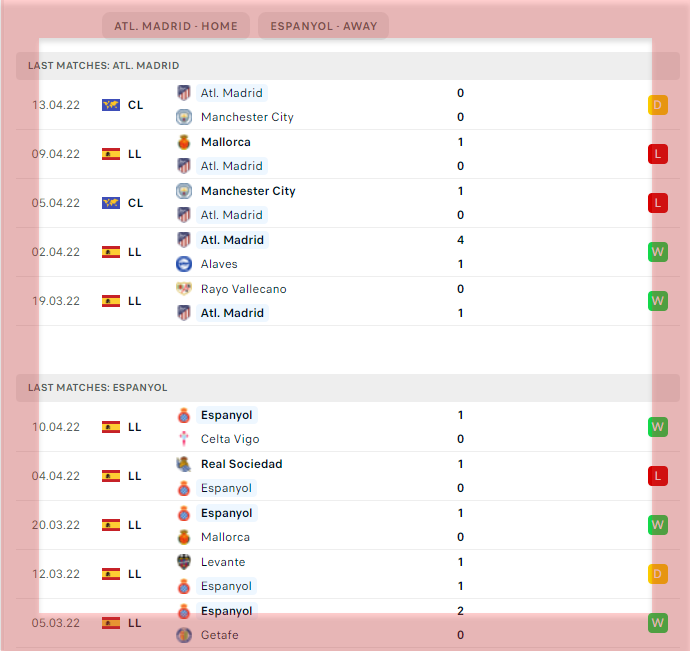