Atlético Madrid had 45% of the possession in that game and 16 shots, 7 of which were on goal. Lvaro Morata (5′) was the lone player for Atlético Madrid to register a goal.

Five of Real Sociedad’s 12 shots on goal were successful. Real Sociedad received a goal from Umar Sadiq (55′). Diego Simeone’s Atlético Madrid scored 8 goals during their previous six games, for an average of 1.33 goals per game.

Considering the pre-game information, Atlético Madrid: have won their last 7 meetings against Celta Vigo without losing a league match.

have lost their last two league games at home. Celta Vigo enters this match fresh off a 3-0 La Liga victory against Cádiz in their previous contest.

Celta Vigo had 58% of the possession in that game and 5 of their 9 shots on goal were successful.

Iago Aspas and Scar both scored a goal for Celta Vigo in the 56th and 75th minutes. Cádiz made 7 attempts at goal, but none were successful.

Celta Vigo, led by Eduardo Coudet, has scored eight goals in their last six games. The total number of goals they have let up in those same matches is eight.

Prior to this match, Celta Vigo had played Atlético Madrid on the road 10 times in league games,but had never defeated them. A string of really poor away performances.

Looking back at their previous head-to-head matches from September 21, 2019, we can see that Atlético Madrid won three of them, Celta Vigo won none, and there were three games that were tied.

During those matchups, 13 goals were scored between them, with 9 coming from Atleti and 4 from Os Celestes. There are 2.17 goals scored on average per game.

Atlético Madrid had a 36% possession advantage and 6 of its 13 efforts on goal were on target. Renan Lodi (36′, 60′) was the lone member of their team to register a goal.

Celta Vigo made 16 attempts at goal, and only two of them were successful.Alejandro Hernández Hernández served as the referee for the contest.

Diego Simeone, the manager of Atlético Madrid, has a fully healthy roster to choose from and has no reason to be concerned about anyone’s fitness going into this match.

The manager of Celta Vigo, Eduardo Coudet, has no fitness concerns whatsoever going into this match because his team is fully healthy and prepared. 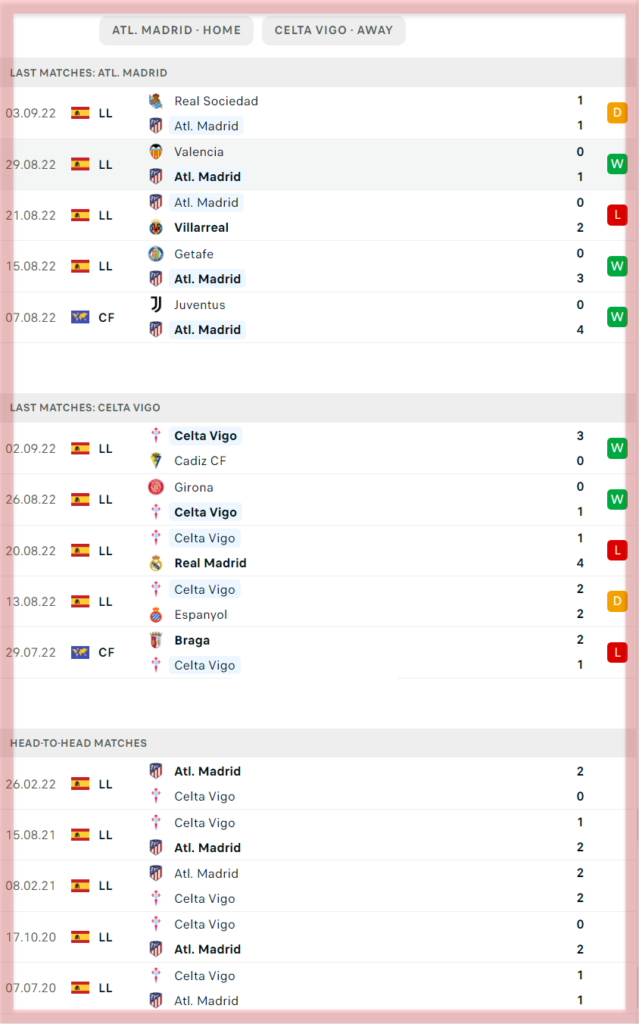