Atletico GO vs Coritiba – Atletico Go‘s season has started off slowly. The team has yet to win a match in its six previous appearances. Their dismal performance has led them to the bottom of the league table, with only three points to their name. The team has also lost their last two matches in a row.

Coritiba has had a difficult start to the season, with uneven outcomes in their first few games. The club has three wins, one tie, and two losses from its six games thus far. The squad is currently in sixth place in the league rankings, with ten points earned thus far. The team won their previous encounter and will be hoping for further victories in the following matchups.

Coritiba’s most recent match was against America Mineiro, in which Coritiba scored the game’s sole goal while Mineiro failed to score. The game ended with an FT score of 1-0.
Atletico Go won the previous h2h with a 3-1 FT result. In their last three away encounters against Atletico Go, Coritiba has failed to win.

From the start of the season, Coritiba has outperformed Atletico Go in their encounters. Coritiba has won three of its previous six games, while Atletico Go has failed to score in any of them.

Atletico Go has lost each of its last three home games. Atletico Go has scored under 1.5 goals in each of their encounters and has also scored in the second half of their home fixtures. On their road travels, Coritiba has had little success. The team has drew one and lost two of the three away matches it has played.

Coritiba will most likely win their first away encounter of the season against Atletico Go. In the last two matches, Goianiense has failed to score. As a result, we should anticipate Coritiba to preserve another clean sheet in this match. 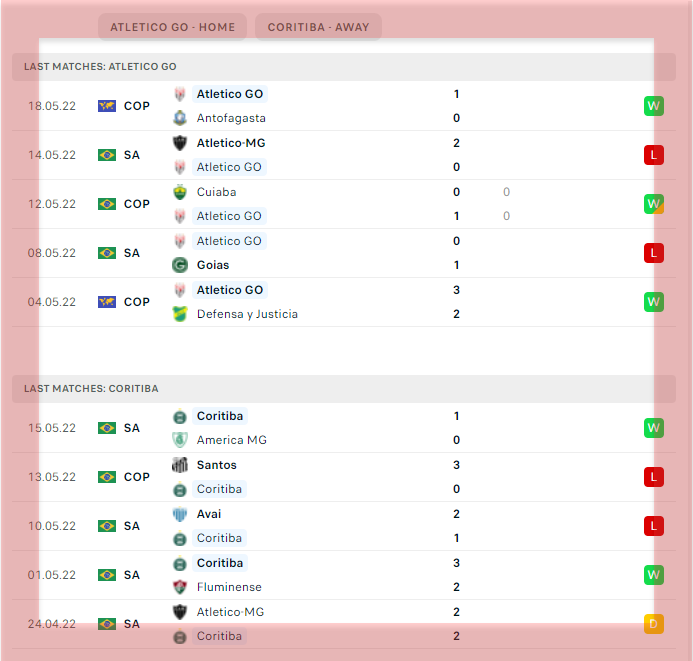