Atletico GO vs Antofagasta – The defending champions, Atletico GO of Brazil, will meet the bottom-placed Antofagasta of Chile at Estadio Antonio Accioly in Round 5 of the Copa Sudamericana in Group F on Wednesday.

Their most recent group match ended in a 3-2 victory over Defensa y Justicia, and they are determined to keep their promotion ticket.After six league games in Brazil’s Serie A, Atletico GO has yet to win.

They have each lost and drawn three times and are currently in second place with only three points in hand.The hosts come into this match after losing 0-2 to Atletico MG in their previous league match.

Antofagasta, on the other side, is last in the group with three points from four games. They have only won once in four games and have the lowest goal ratio in the group.

The Chileans were defeated 1-2 by LDU Quito in their previous group match and were unable to bring that winning spirit into this match.With only 10 points from 13 games, Antofagasta is in Chile’s first tier.

They have only won one league game and have lost back-to-back league series to Palestino and U. Espanola, in which they were unable to score. The only time they met was in the opposite fixture, which Antofagasta won 2-1 at home.

Atletico GO only lost one of their eleven home games, which were contested in a variety of locations. In the Copa Sudamericana, they also won both of their home games, accumulating 6 points.

Antofagasta, meantime, has lost four consecutive away games, allowing a total of nine goals. They also went winless in all of those games, and haven’t won an away game in their last five road games. In addition, the visitors were defeated 4-0 by LDU Quito in their only Copa Sudamericana away game.

Given the visitors’ recent poor form, we believe a home victory is likely on Wednesday. 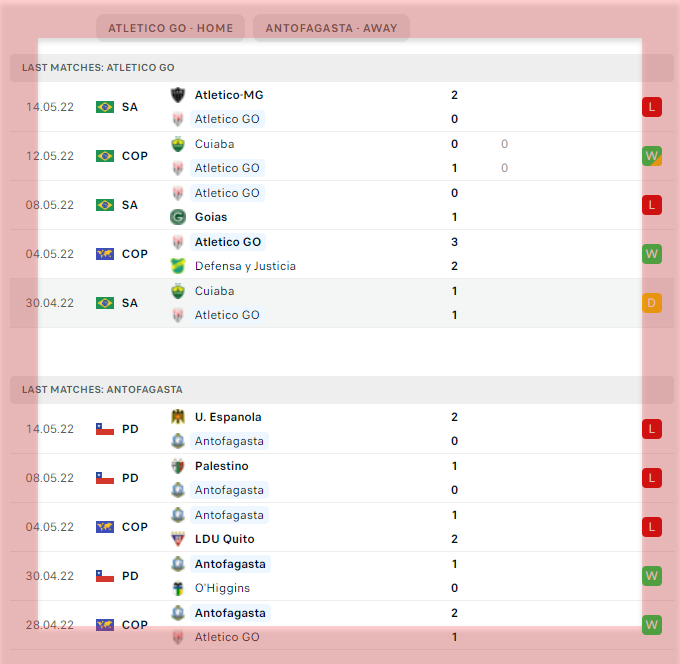