Atlanta United vs Columbus Crew – Atlanta United has had a mediocre start to the season thus far. They continued to record the same till their ninth match of the season. They have, however, put together a recent run of unblemished performances. They have a good offensive line, but their defence isn’t particularly powerful.

Atlanta United is on the outskirts of the safe zone and will be attempting to get inside. Their recent string of three consecutive unblemished victories may encourage them to make it four games in a row by securing a positive result.

Meanwhile, the Columbus Crew had a shaky start to the season and continued to lose games. With 13 points, they are currently in 12th place in the Eastern Conference rankings. Their offensive and defensive line-ups appear to be standard.

The Columbus Crew were defeated 0-2 at home by Los Angeles FC in their most recent league match. They have now gone three games without a win in the league as a result of that loss. They’ll be trying to improve by achieving a better result in their forthcoming excursions.

In their last six meetings with Atlanta United, Columbus Crew has won four and lost two.
Atlanta United won their most recent match by a score of 2-3.
In four of the last six head-to-head games between these two teams, the both teams to score option has been successful.

This season, Atlanta United has had a strong home record. This season, they have yet to lose a game at home. Their unbeaten streak may have given them the confidence to go into the next match here with the goal of securing a win.

The Columbus Crew, on the other hand, have yet to win on the road this season. Their defensive line has also given up two goals in each of their last two road games.

Based on the above statistics, we believe Atlanta United will come out on top in this match, despite their recent head-to-head history with Columbus Crew. 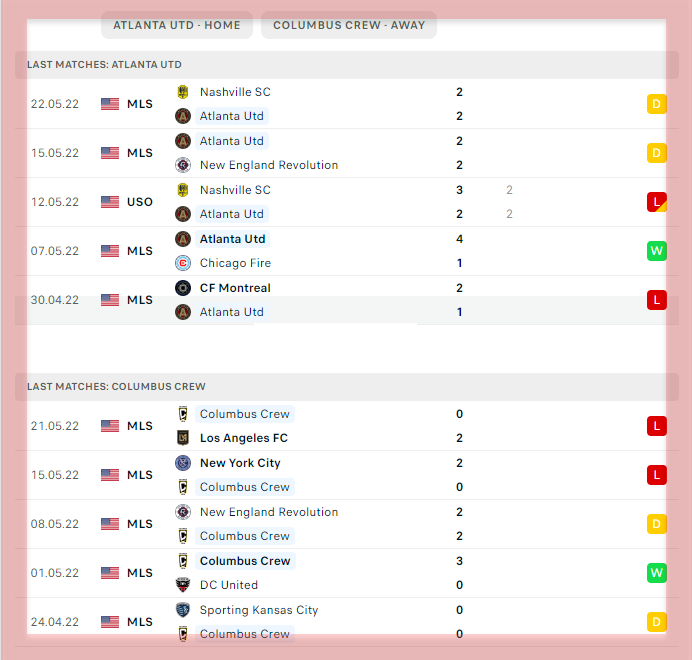