Athletico PR vs Libertad – Athletico Paranaense will host Club Libertad at the Arena da Baixada on Wednesday, bringing two teams from opposing ends of the Copa Libertadores Group B table together. With two games remaining, the visitors are in the lead, but a win for the hosts would tie them on points, with only a few points separating the four teams. Athletico Paranaense has had a mixed bag of results in the Copa Libertadores, with one win, one draw, and two losses in their first four games. The fact that Luiz Felipe Scolari’s club has only scored one goal in all of those games is a huge part of the problem, which explains why they have failed to get results.

No team in Group B has conceded more goals (six), and the squad must aim to balance that out in the final two games.Athletico Paranaense are coming off a 2-1 setback to Fluminense in the Campeonato Brasileiro Serie A, with Matheus Felipe’s 91st-minute goal serving as a consolation. They’ll also be looking to improve on their previous Copa Libertadores performance, in which they were defeated 5-0 by The Strongest, severely damaging their goal difference.

The visitors, on the other hand, have been far stronger in this tournament, which is why they are currently atop Group B, seeking to advance to the next round. Club Libertad has only been defeated once in the tournament, and it was against Caracas in their most recent match, with Samson Akinyola scoring the game’s only goal. In other competitions, Daniel Garnero has watched his squad rebound quickly, winning their past three games in remarkable ways.

They have scored seven goals and conceded only one since that setback, giving them plenty of confidence and momentum heading into this match. When these two teams met earlier in the season, Club Libertad scored once to win 1-0, and if they can duplicate that performance, they will win the group.

Athletico Paranaense has had varied outcomes in this competition, but with the quality in their team, they are more than capable of winning when they want to. Club Libertad, unfortunately for the hosts, has the possibility to win the group in this game, and that alone should motivate them to get three points. 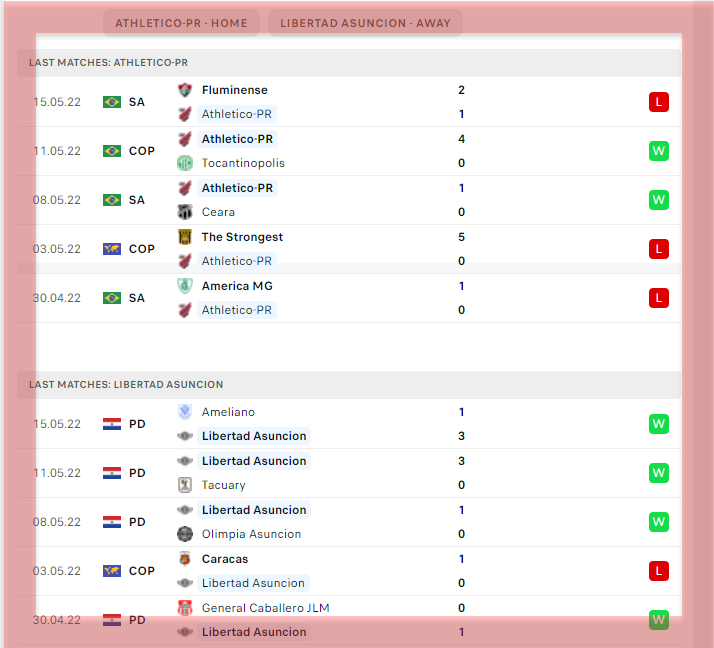