Athletico PR vs Estudiantes -On Thursday, the opening leg of Athletico Paranaense’s quarterfinal Copa Libertadores matchup against Estudiantes will be played at home.

Athletico PR has only ever advanced through this stage as the runners-up to Sao Paulo in the main continental competition of South America. That was in 2005.

The fact that Furacao won the Copa Sudamericana in 2018 and 2021, which is essentially South America’s equivalent of the Europa League, has undoubtedly strengthened their collective big game attitude and experience.

Felipe Scolari, the 2002 World Cup-winning manager of Brazil, assumed leadership of the team in May of this year.

His 60% win rate is admirable. The 73-year-old has his new team in contention for the Copa Libertadores and Copa da Brasil.

The former Chelsea manager will be confident that his team can make a statement against their Argentinian opponents, especially in front of what is expected to be a boisterous Arena da Baixada.

Estudiantes, who recently won the Copa Libertadores for the fourth time, do have a lot of historical pedigree in this competition in contrast to their Brazilian rivals.

Former Manchester United midfielder Juan Sebastian Veron won player of the tournament that year with Estudiantes, where he now serves as chairman.

Ricardo Zielinski is in control on the field, where recent performances have lacked. Los Pincharratas are 22nd in the Argentine Primeira Division with one win in eight games.

The Copa Libertadores now determines whether Zielinski’s squad had a successful season. They must avoid losing on Thursday before trying to win at home in the second leg.

Christian Cardoso, a midfielder for Athletico PR who is still recovering from a knee injury, won’t be playing. Forward Pablo, who has two goals this year, is also questionable because of a thigh problem.

Due to knee problems, Estudiantes will be missing defenders Fabian Noguera and Ezequiel Munoz throughout their trip. Due to a foot issue, forward Mauro Boselli is also out of the game. 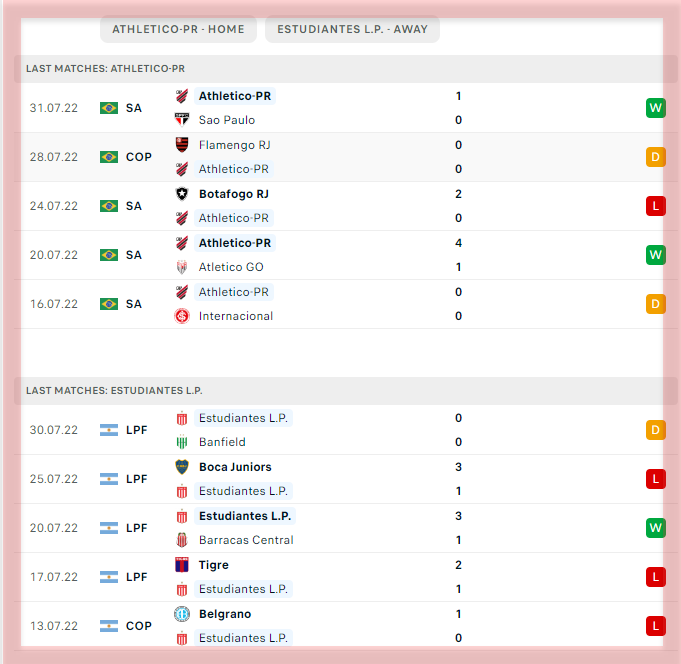