Having won two of their past three league games, the visitors will go into the match in a better mood. On the other hand, Bilbao has gone four games without a victory.

With a precipitous decline in performance over the past several weeks, Athletic Bilbao spoiled a promising start to the campaign. The last two league matches between the Basques and Girona (a 2-2 draw at home) and Barcelona saw the Basques give up as many as six goals (a 4-0 defeat on the road).

The matchup against direct competitors for positions in Europe comes at a difficult time for Ernesto Valverde’s team because they failed to keep a clean sheet in four straight games as well.

Villarreal also struggled in their most recent games. After a difficult 3-0 loss to Barcelona at Spotify Camp Nou, they only just managed a 2-1 victory over Almeria at Estadio Ciudad de Valencia.

Seven days prior, El Submarino Amarillo defeated Almeria with ten men on the field thanks to Alex Baena’s dismissal just after he had equalised the score. Unai Emery, the manager of Villarreal, left for Aston Villa, and Quique Setien, the former manager of Barcelona and Betis, assumed over.

In their last 23 home matches against Villarreal, Bilbao has prevailed in 10, tied in 7, and lost in 6. In three of their previous four head-to-head meetings, these rivals tied each other 1-1. Three or more goals were scored in just one of the previous seven head-to-head matchups.

Villarreal has the second-best defence in the league, thus there is reason to believe that their match against Athletic Bilbao will end in a scoreless draw. 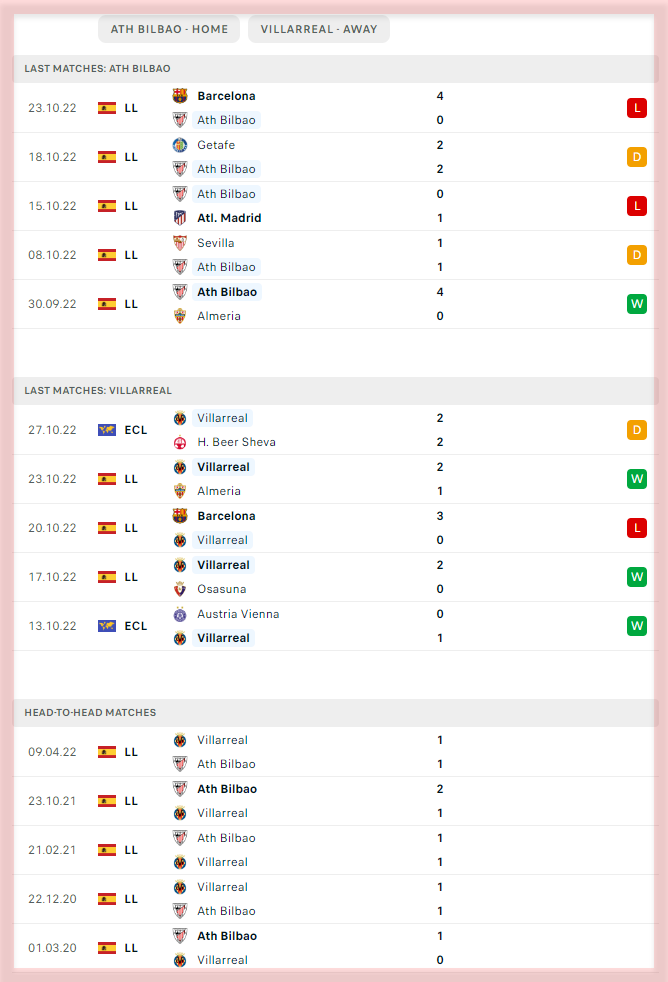