Athletic Bilbao vs Valencia – Valencia was previously one of the strongest teams in the Spanish top division, but not anymore. They have gone a long time without a win and have conceded many goals this season. They are currently tenth in the rankings, and while they have a mathematical possibility of qualifying for a European competition next season, it will take a miracle for them to do so.

Athletic Bilbao, however, is not. They have proven themselves in this season’s La Liga. Despite failing to maintain this level, they are currently ranked 8th in the table. Their recent run has been good, and with four games left, they only need one point to catch the seventh-placed team. A top-seven result is required for any Spanish team to compete in European events next season.

They have nothing to lose and everything to win, therefore they will likely be a threat for the rest of the campaign. Expect them to win three points this weekend against Valencia.

Last weekend, Bilbao defeated Atletico Madrid 2-0 at home. They also have a two-game winning run and have scored five goals. Notably, they have only lost once at home this year and have scored twice or more in six of their previous ten visits.

Valencia, meanwhile, drew 1-1 with Levante at home last weekend. They are also winless in six games and have lost three of their last four overall. When these two meet on Saturday, it’s clear that Bilbao has the advantage. Expect them to score three points. 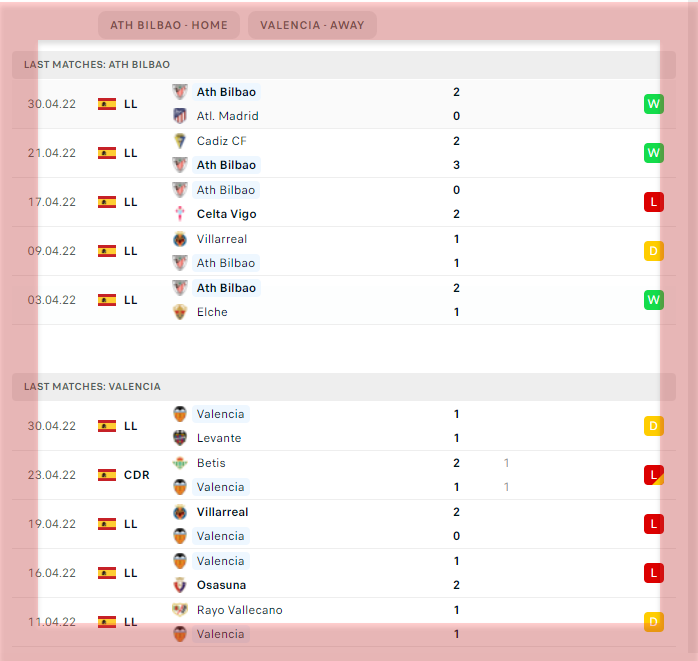