Athletic Bilbao vs Osasuna – The 11th-placed Osasuna squad of Jagoba Arrasate will travel to San Memes in the Basque Country this weekend to face Athletic Bilbao in La Liga.

In classic mid-table manner, a win for either of these teams will have no bearing on their respective league places, but bragging rights are on the line, and neither Arrasate nor Marcelino will be willing to lose for long.

Athletic’s season appears to have to a halt in recent weeks, with the threat of mid-table mediocrity hovering over their remaining fixtures.

Marcelino’s team has gone undefeated in eight games, but they have only won two of those games, totaling 12 points.
Athletic defeated Julen Lopetegui’s high-flying Andalusians 1-0 last time out, with Inaki Williams scoring the game’s only goal in the 90th minute.

While a win this weekend will not change Athletic’s fortunes, it will put them three points closer to their distant dream of European qualification.
Following a disastrous start to the season, Arrasate’s Osasuna team has turned things around spectacularly, with a streak of positive results.

Osasuna has won three of their previous eight games, losing only two and picking up 12 points in the process.
Osasuna were defeated 2-0 by Real Madrid last time out, with Eder Militao and Casemiro scoring crucial goals in the second half.
This season, Arrasate’s men have done well on the road, scoring 17 points in total. With three points, Osasuna may close the gap on 10th-placed Celta Vigo to just one point.

Athletic are currently dealing with an injury crisis, with a number of first-team regulars sidelined for this match.

Chimy Avila, a fan favorite for Osasuna, appears to be regaining match fitness, but he has yet to play 90 minutes this season.

While this game will have an impact on final league standings, it is essentially a dead rubber, which will be reflected in the players’ actions on Saturday. Both sides have relatively compact defensive groups, therefore a draw is a foregone conclusion. 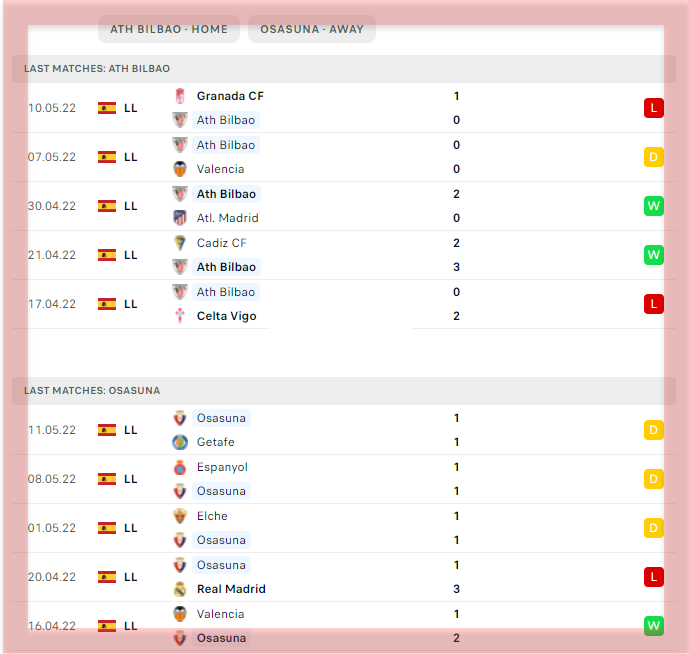