Athletic Bilbao vs Espanyol – Following up on their recent performance, Athletic Bilbao will be looking for more of the same following their 0-4 La Liga victory against Cadiz.

Athletic Bilbao enjoyed a 63% possession advantage and 8 of their 20 shots on goal were successful. Iaki Williams (24′), Gorka Guruzeta (56′, 93′), and Lex Berenguer (78′) scored goals for Athletic Bilbao. Cádiz made nine shots at goal at the other end, scoring three of them.

The Athletic Bilbao rearguard has consistently displayed quality, as shown by their most recent results. Athletic Bilbao has been stingy, as seen by the fact that in their last six games, they have only allowed two goals to be scored at their end.

Just how long that tendency will actually last in this area remains to be seen. According to the form guide going into this match, Athletic Bilbao have played five games without losing to Espanyol in the league, have gone undefeated in their past five league home games.

Espanyol and their travelling supporters will be hoping for a better outcome here after experiencing defeat to Real Madrid in La Liga competition the last time around.

Real Madrid scored goals through Vinicius Jnior (12′) and Karim Benzema (88′, 100′). The numbers don’t lie, as Espanyol has allowed goals in five of their last six games while having 10 goals scored against them overall. Espanyol could certainly use some organisation in the back.

Diego Martnez, the manager of Espanyol, has no reported fitness issues going into this game because his team is completely injury-free and eligible for selection. Due to his suspension, Sergi Gómez will not be allowed to participate in this game. 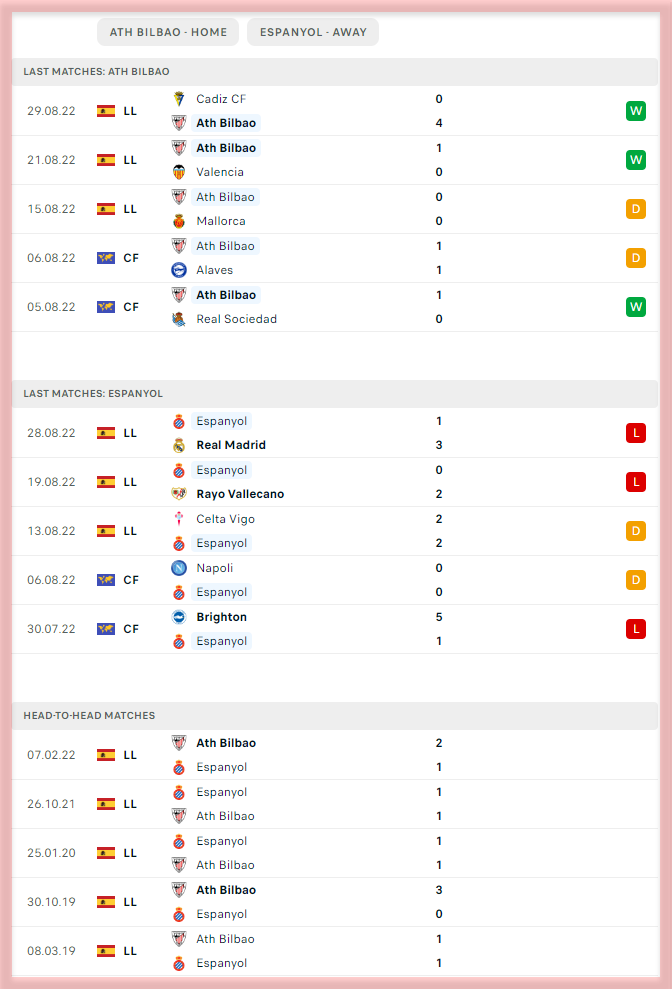