Atalanta vs Sampdoria – After a 3-3 tie against Juventus in Serie A, Atalanta will take the field in this contest. Atalanta enjoyed 53% of the game’s possession and 4 of its 14 shots on goal were successful.

Atalanta has recently struggled to retain clean sheets, but they have also done well enough to score on their own opportunities.

Sampdoria and their supporters are hoping for a better outcome this time after being trounced by Udinese in their previous Serie A game.

Sampdoria had 55% of the possession in that game, and they had 9 shots on goal with 1 of them being successful. Udinese, on the other hand, made 14 attempts at goal, with 5 of them succeeding.

Udinese’s goal came from Kingsley Ehizibue in the 88th minute. It is important to note that Sampdoria has only scored two goals in their last six games, a depressing result.

Additionally, I Blucerchiati have had eight goals scored against them overall in those contests. We must ascertain whether that pattern will continue into this upcoming game.

Looking at their most recent head-to-head matches dating back to 08/07/2020, we can see that Atalanta has won 5, Sampdoria 1, and there have been no drawn matches.

Throughout the course of those games, they combined to score 18 goals, with 14 coming from La Dea and 4 from I Blucerchiati. That equals an average of three goals scored every game.

We believe that Atlanta can and should maintain control for an extended length of time and should be able to take advantage of some of the opportunities they create.

Sampdoria won’t have an easy time scoring their own goal, despite the fact that we do anticipate them succeeding at least once.

Regarding the latest bookmaker odds on the full-time result market, the win for Atalanta is available for 1.33, backing a drawn result is 5.25 and staking on the winning team to be Sampdoria gets you 9.1. They are the best market prices being offered at present. 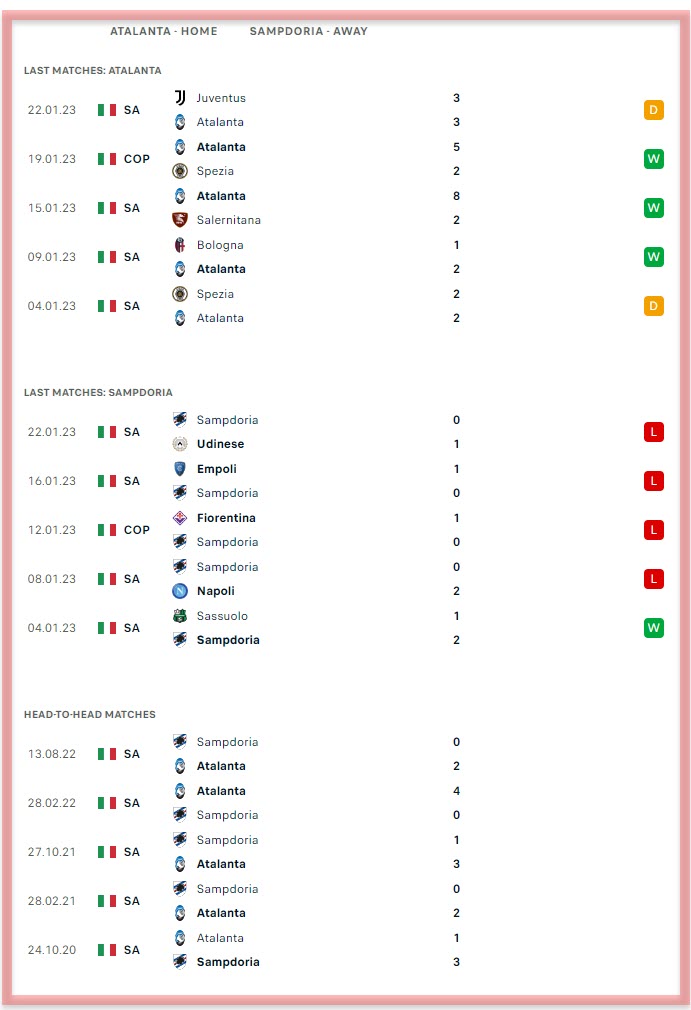