Atalanta vs Napoli – Preview, and Prediction

Atalanta vs Napoli -A real buzz is expected in and around Gewiss Stadium on Saturday afternoon when the top two Serie A teams take on each other in the derby of Matchday No 13.

Napoli have been flying high since the beginning of the season and are by far the hottest team in the entire continent at the moment, I Partinopei have an amazing record of 10 wins and 2 draws in the opening 12 rounds of the season.

When you add their high-profile displays in the UEFA Champions League and five wins in the opening five group phase games in the section with the likes of Liverpool, Ajax, and Rangers, you have to give words of praise for the magnificent job Luciano Spalletti has done with this group of players so far in the season.

Khvicha Kvaratskhelia stood out as one of the best young players in Europe this season. He has been brilliant so far in the campaign, netting six goals in Serie A as an offensive midfielder.

The Georgian star was quite inspired last weekend, too, as he was the main catalyst to Napoli’s impressive 4-0 thumping of Sassuolo with two assist and a goal at Stadio Diego Armando Maradona.

It will be very interesting to see how Napoli will deal with Atalanta who will also come into this tie on a high following the easy 0-2 victory over Empoli six days ago away at Stadio Carlo Castellani.

The outfits have 18 victories apiece going into their 51st head to head encounter, Atalanta won three of the previous four H2H meetings with Napoli but I Partinopei came on top in the previous H2H meeting at Gewiss Stadium (1-3).

We have seen at least four goals and both teams scoring in four of the previous five H2H matches, This match has goals in it and we are surely in for a spectacular affair between two of the best teams in the elite tier of Italian football this season.

Since Napoli look unplayable at the moment, we will take the Away win & Both Teams To Score pick as the main betting option at the odds of 3.75. We also like the value offered by the 3.40 odds for Khvicha Kvaratskhelia to score anytime for the visitors in Bergamo.

Atalanta vs Napoli -Head to Head 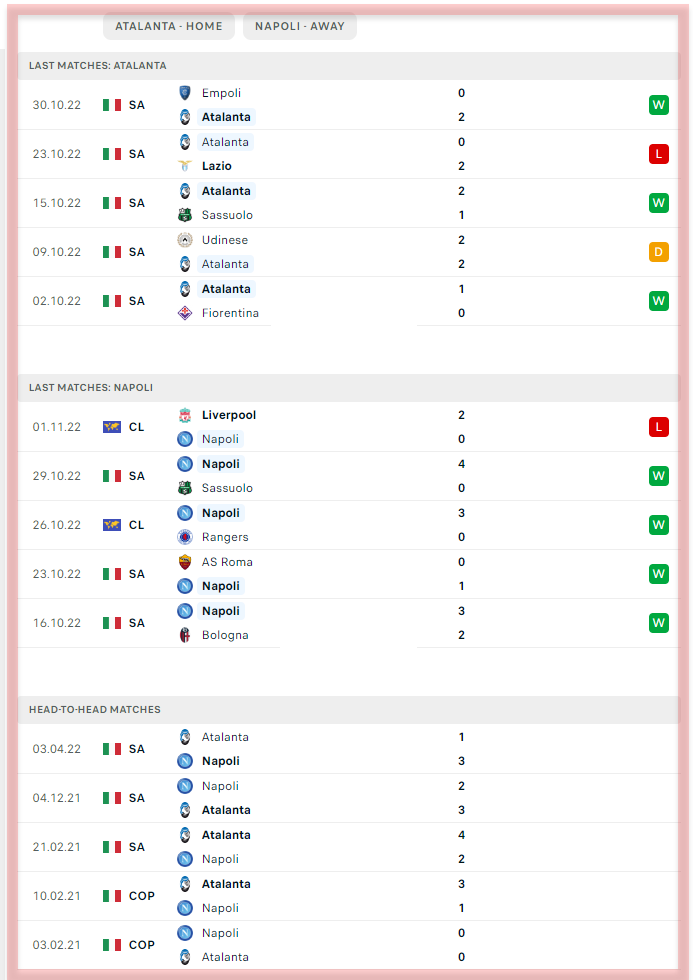