Atalanta vs Empoli – Preview, and Predictions

Atalanta vs Empoli – Atalanta’s four-match winning streak (W2, D2) came to an end against AC Milan last time out, jeopardizing their prospects of finishing in the top seven. If Roma fail to win on Friday or if they can better Fiorentina’s performance, Atalanta might yet snare a European spot on the last day.

Atalanta had thought to be sailing into the last day of the season with at least a Europa League berth, but their home form in Serie A (SA) since December 2021 has been dreadful (W1, D5, L4). Atalanta is one of only two SA teams not to have lost a league game this season after scoring first (W13, D2), so scoring first could be the key to breaking that dreadful home run.

In terms of Atalanta, facing mid-table Empoli, who have nothing to play for, could be excellent competition at this point in the season. Empoli have won just one of their last 20 SA games (D9, L10), leaving Aurelio Andreazzoli’s club to thank their strong early season start for avoiding relegation.

Empoli’s situation is a little less dire away from home, as they have collected more SA points (21) on the road this season than they have at the Carlo Castellani Stadium (17). However, Empoli have conceded eight goals in their last two league away games, seven of which came after the 35th minute, implying that a lack of concentration and motivation may be contributing to their recent dismal results.

Mario Paali has scored four goals in his previous five games for Atalanta, three of which have come after the 75th minute. Meanwhile, Andrea Pinamonti has scored just two goals in Empoli’s previous seven SA away games. Only Inter Milan (six) has won more SA games after conceding first before the round than Empoli (four). 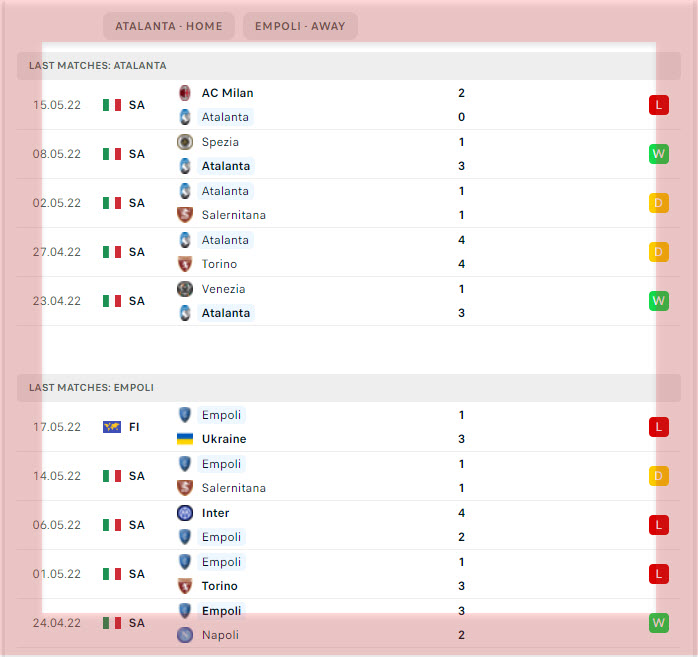