Aston Villa vs Manchester City – After suffering a 2-1 defeat at the hands of Arsenal in their most recent Premier League match, Aston Villa will be seeking to improve on their previous performance in this contest.

During that game, Aston Villa held a 40% possession advantage and had 4 shots on goal, with 3 of them finding their mark. Douglas Luiz was the only player to score for Aston Villa, and his goal came in the 74th minute.

The Gunners had 22 shots on goal, but only 9 of them were on target. Both Gabriels, Jesus (30′) and Martinelli (77′), found the back of the net for Arsenal. In the most recent games, Aston Villa have only managed to avoid giving up goals on a handful of occasions.

The truth of the matter is that Aston Villa’s defence has been breached in six of their past six matches, which has resulted in ten goals being conceded by the team.

Before this encounter, Aston Villa had not won a league match against Manchester City in any of their previous 11 attempts against the club. After their most recent match, in which they defeated Nottingham Forest by a score of 6-0, Manchester City will come into this one riding high on the momentum of a Premier League victory.

During that game, Manchester City held control of the ball for 75% of the time and had 17 shots on goal, with 9 of them landing in the target area. Erling Haaland scored for Manchester City in the 12th, 23rd, and 38th minutes, Joo Cancelo scored in the 50th minute, and Julián lvarez scored in the 65th and 87th minutes. There were eight shots on goal taken by Nottingham Forest, however only one of them was on target.

Twenty of Manchester City’s goals have come courtesy of their own efforts during the course of the last six matches that they have participated in. On each of those times, Manchester City also managed to find their way onto the scoresheet.

During that time span, their competitors have managed to score 8 goals against them. It will be fascinating to observe whether or not that pattern will be maintained in this location.

Taking a look at the facts before the match, Manchester City have not been defeated by Aston Villa in any of the five matches in the league that have taken place away from their home stadium in the previous season.

A very respectable record versus them while they were on the road, have an undefeated record in their previous 20 league matches played away from home. A simply incredible string of wins away from home.

Aston Villa manager Steven Gerrard will be without the services of injured players Diego Carlos and Jed Steer due to concerns with their Achilles tendons. Carlos’ tendon ruptured, while Steer’s issues were related to his Achilles tendon.

Pep Guardiola, the manager of Manchester City, does not have any fitness concerns to speak about prior to this matchup because he may choose players from a roster that is in perfect health.

According to our analysis, Aston Villa possesses sufficient firepower to crack the defence of this Manchester City club; but, one goal may not be quite as many as the goals that they could allow to be scored against them. As a result, we are projecting a slim win for Manchester City with a score of 1-2 after regulation and overtime. This one should be quite fascinating. 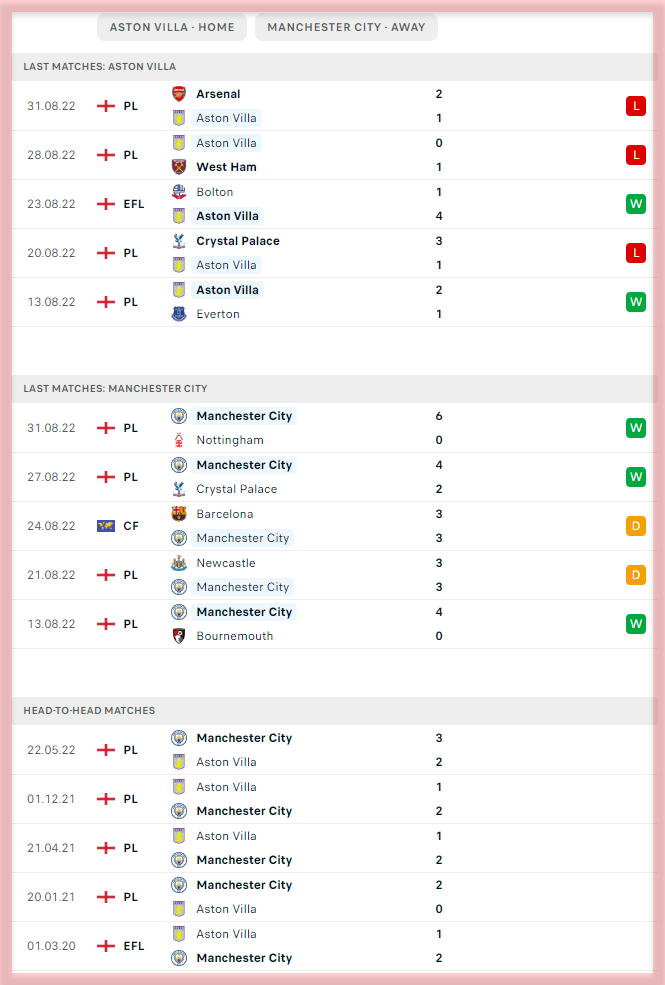