The Lions eased to a 3-1 success at Burnley at the weekend, while Jurgen Klopp’s side were forced to accept a point in a 1-1 draw with Tottenham Hotspur.While Gerrard is yet to prove that he can go toe-to-toe with the big boys with his Aston Villa side, the Lions have welcomed back-to-back wins over two basement sides in Norwich City and Burnley to end their miserable patch of form over the Easter period. After confirming the Canaries’ demotion, Villa made Burnley’s survival task that little bit more difficult by storming to a 3-1 success at Turf Moor on Saturday, as Danny Ings, Emiliano Buendia and Ollie Watkins were all on target before Maxwel Cornet’s consolation for the Clarets.

Taking seven points from the last nine on offer in the Premier League and conceding just once in that stretch sees Villa threatening to break into the top half as they lie in 11th spot in the table, with Newcastle United and Leicester City both failing to usurp them on Sunday. Gerrard never collected a Premier League title with Liverpool as a player and certainly cannot afford to let sentimentality creep in before Tuesday’s game, with the 41-year-old – and the Anfield faithful – fully aware of his task at hand at Villa Park.

The ex-midfielder’s legacy with Liverpool should not be shattered even if he does oversee a result which all but ends the Reds’ Premier League dream, but Villa have won just two of their last eight home games in the top flight, and a wounded Liverpool are a force to be reckoned with.Jurgen Klopp had plenty to say about Tottenham Hotspur’s tactics following the full-time whistle at Anfield – much to the amusement of the travelling crowd – and the Reds’ quadruple hopes suffered a major blow at the hands of Antonio Conte’s men during a 1-1 draw on Merseyside.

Left in acres of space at the back post, Ryan Sessegnon had all the time in the world to pick out Son Heung-min for his 20th goal of the season, but the little magician Luis Diaz saw his effort take a nick off Rodrigo Bentancur and wrong foot Hugo Lloris to steal a point for Liverpool. Cross after cross after cross led to nothing for Liverpool against a steadfast Lilywhites defence, and while Klopp’s side temporarily went back to the summit on goal difference, Manchester City are now three points clear after beating Newcastle United on Sunday afternoon.

A six-game winning run in all competitions and 12-game winning run at Anfield in the Premier League came to an end for Liverpool at the weekend, but their unbeaten run domestically now stands at 16 matches, and they have kept clean sheets in four of their last five away from home in the top flight. Flashbacks of the 7-2 humbling will inevitably cross the minds of Klopp and the Kop ahead of Tuesday’s journey to Villa Park, but they have since won three in a row against Villa in all competitions and will be in no charitable mood towards Gerrard while the quadruple dream remains alive.

Villa need no lessons in carving their way through the Liverpool high line, and the Lions’ recent upturn in form and numerous ex-Reds aiming to get one over their former club could make this a banana skin for Klopp’s side.

The Reds boss is likely to tinker with his side ahead of the weekend’s FA Cup final but will be aware that any more dropped points effectively ends their Premier League title hopes, and we have faith in Liverpool to eke out a narrow win against a Villa side whose defence is still far from watertight 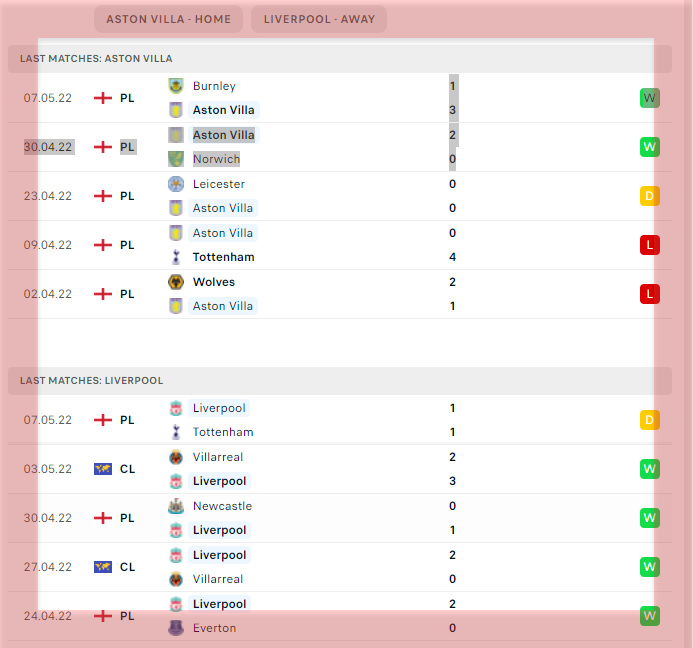