Aston Villa vs Everton – On Saturday afternoon, Steven Gerrard and Frank Lampard face off in the Premier League for the first time as managers of Aston Villa and Everton, respectively.

Both teams lost their opening match of the season: Everton lost 1-0 to Chelsea while Villa lost 2-0 to Bournemouth.

Gerrard and Lampard faced off 34 times throughout the course of their illustrious playing careers, with Lampard triumphing 16 times to 11 for his England teammate.

However, both managers are under pressure to perform at their respective clubs after being given the leeway to make the required adjustments to their teams in the transfer market before of this match.

From Gerrard’s standpoint, he would have been thrilled to sign Boubacar Kamara and Diego Carlos soon after the end of the previous campaign, and the West Midlands team was also fortunate to get Philippe Coutinho on a long-term contract.

However, despite goals at each end of the game, the trio was unable to stop Villa from losing 2-0 to newly promoted Bournemouth at the Vitality Stadium.

This feels like a match where Villa need to produce to stop further criticism coming their head coach’s way at a time when there also seem to be problems between Gerrard and former captain Tyrone Mings behind the scenes.

Even though Everton barely avoided relegation last season and opened this one with a loss, everything currently feels much more upbeat at Goodison Park.

Salomon Rondon, a backup striker, has returned from suspension, which is only going to help the Toffees’ lack of a recognised forward against Chelsea.

Everton only lost to a Jorginho penalty in a game where they lost two defenders to injury, so Lampard should be quite content with his team’s performance against his former team.

Conor Coady and Amadou Onana, who came from Wolverhampton Wanderers and Lille, respectively, since that setback, have joined the team. Each player brings with them expectations based on past performance and future potential.

Lampard needs every member of his team to perform well in a highly anticipated match, even though it may be asking too much for the pair to be particularly significant on Saturday after signing on Monday and Tuesday, respectively.

Even at this early stage of the season, both teams and the two managers are under pressure to jump-start their respective seasons and gain an advantage over one another. However, we can anticipate a tough match at Villa Park, one that might result in a scoreless draw of the spoils.

In recent years, Aston Villa hasn’t given up all that often. In actuality, Aston Villa’s defence has been breached in 6 of their past 6 games, allowing 10 goals in the process.

The numbers don’t lie, and Everton has allowed goals in five of their last six games while having 12 goals scored against them altogether. Everton can undoubtedly make improvements at the back. Putting aside previous outcomes, we only need to see if the tendency will continue in this game. 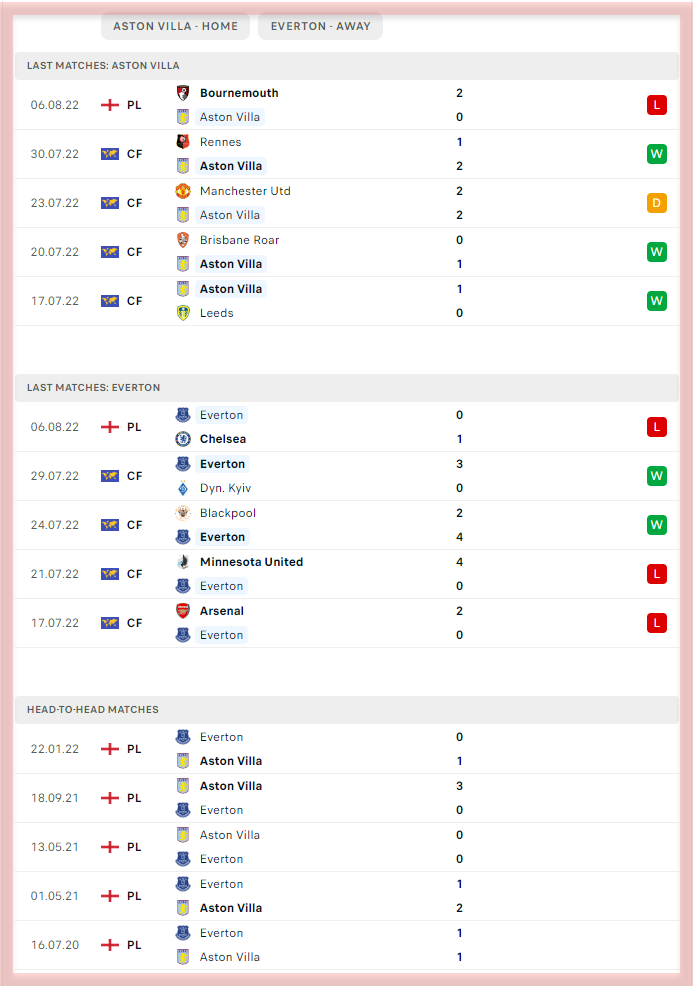