Aston Villa vs Burnley – Burnley are in desperate need of a win right now. They are still in the relegation zone with only two games remaining, and they will do anything to prevent relegation to the Championship.

They have a total of 34 points from their 36 games thus far, with only seven of those games ending in victories. And if they want to stay in the Premier League, they’ll have to beat Everton or Leeds, and the fact that they have a game in hand on Leeds helps.

But none of that will matter if the team fails to convert this advantage. They will treat the remaining games as if they were finals, and we should expect a hard battle this Thursday at Villa Park.

Meanwhile, English legend Steven Gerrard is attempting to turn around Aston Villa’s season, and he has been somewhat effective thus far. The team is currently scoring points routinely, and they will be anxious to finish the season on a good note.

And this forthcoming encounter represents a significant opportunity for them, especially given their opponents’ desperation. Expect Villa to win against struggling Burnley, and for goals to arrive in large numbers, given the visitors’ desperation.

Three or more goals were scored in six of the last nine games, and Villa won 1-3 on the road in their most recent encounter.

Both clubs scored goals in three of the previous five encounters at this venue. The most recent match at this venue ended in a 0-0 tie.

Villa drew 1-1 with Crystal Palace at home the other day, and they had gone unbeaten in four of their previous five games.

Also worth noting is that they had gone unbeaten in five of their previous nine home games, with three of their four losses coming against Arsenal, Tottenham, and Liverpool.

Burnley, on the other hand, lost 1-0 on the road against Tottenham last week, and having previously lost 1-3 at home to Steven Gerrard’s side. On top of that, they have a bad head-to-head record versus his opponent.

Aston Villa is expected to win on Thursday based on these observations. Expect plenty more goals, especially considering the strain Burnley is under.

Only Norwich, who are now in bottom position, have scored fewer goals than Burnley. Throughout the season, the squad has only won twice on the road. 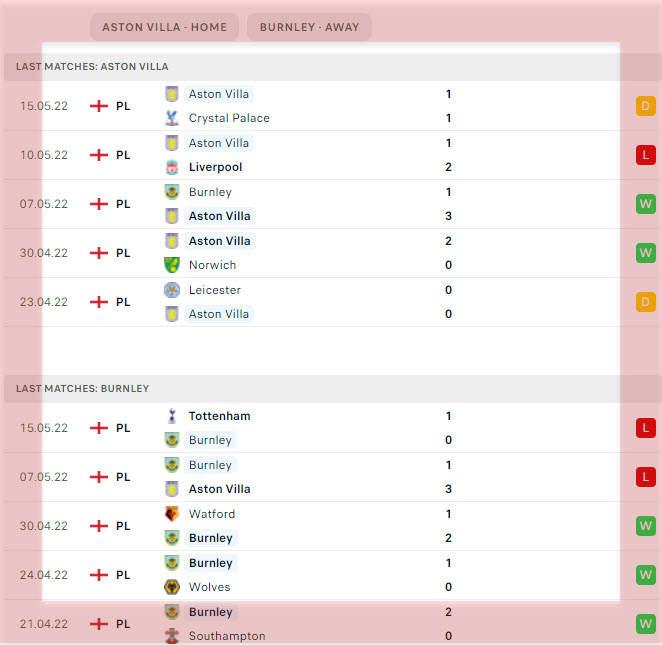