Ascoli vs Benevento – Preview, and Prediction

Ascoli vs Benevento – With each passing encounter in Serie B, each side in the playoffs hopes to build momentum. Ascoli has been playing well recently, which has helped the squad climb the table.

In the last five matches, Ascoli has won four and drawn the other. Their outstanding play has propelled them to sixth place in the league table, with 65 points. The club has gone undefeated in their last five games.

Ascoli’s last encounter was against Ternana. Ascoli scored four goals in the encounter, while Ternana only managed one, resulting in a 4-1 FT victory for Ascoli.

With each passing game, Benevento’s form had deteriorated. The club has only won one of their last five games, losing four of them. In their last three games, the team has lost in a row.

When they play Ascoli in their current form, they will be at a disadvantage. With 63 points, the squad is in seventh place on the standings.

Ascoli won the previous match with a 0-2 FT result, and in the last ten head-to-head matchups, Ascoli has only won twice. The last two head-to-head meetings have concluded with under 2.5 goals.

In the match against Ascoli, Benevento’s recent form puts them at a disadvantage. In the last two matches, Ascoli has won consecutively, while Benevento has lost three in a row.

Ascoli has the advantage of playing at home, as they have gone undefeated in their last nine games. However, in over five of these games, the team has scored over 1.5 goals.

In their last five road matches, Benevento has a mixed record. In the matches, the team has won after losing. They have also failed to score in these defeats.

Ascoli is the clear favourite to win this match. Both teams have scored in their previous meetings and are likely to do so again in this one, with the game concluding with over 2.5 goals. 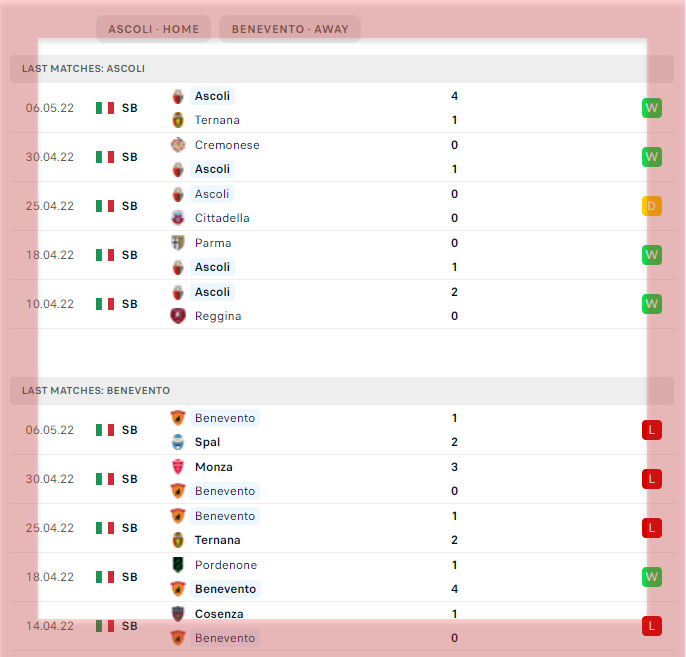