Arsenal vs Leicester – Preview, and Predictions

Arsenal vs Leicester – As Leicester City visits the Emirates Stadium on Saturday afternoon, Arsenal will look to start the 2022–23 Premier League campaign with back-to-back victories.

The Gunners defeated Crystal Palace 2-0 to start the new season, while the Foxes blew a two-goal lead against Brentford to draw 2-2.

Last year, Arsenal’s decision to open the new Premier League campaign in a London derby away from home spelled problems, but Mikel Arteta’s strengthened team made sure that lightning would not strike twice with a professional display against Crystal Palace last Friday.

Aaron Ramsdale had to save his team on more than one occasion, but in the end, a Gabriel Martinelli header from a skillfully executed corner routine and a Marc Guehi own goal gave the Gunners the victory.

With the help of Zinchenko’s assist, Gabriel Jesus’s spirited performance, and William Saliba’s man-of-the-match showing, the trio of debutants set early benchmarks for the months to come as Arsenal looks to get their efforts at the Emirates off to a strong start.

It has been more than 50 years since Arsenal started a top-flight season with back-to-back wins and back-to-back clean sheets. However, the Gunners finished the 2021–22 campaign with three straight home victories over Manchester United, Leeds United, and Everton.

The core of the present Arsenal team should feel confident in their ability to defeat a Leicester team whose summer business has been essentially nonexistent, even though Arteta has stated that his team still hopes to be active in the transfer market before the window closes.

As Timothy Castagne and Kiernan Dewsbury-Hall scored for the Foxes against Brentford to put them two goals ahead, Leicester fans temporarily forgot about their side’s failure to make a single new acquisition as an essentially identical first-team squad took to the field on the opening weekend.

But shortly after the hour mark, Ivan Toney made things interesting, and with only a few minutes left to defend their slim advantage, Leicester allowed former Arsenal youngster Josh Dasilva to curl home a lovely equaliser, making their fans more angrier.

The goal for the upcoming weeks will probably be fending off interest in James Maddison, Wesley Fofana, and Youri Tielemans. Brendan Rodgers has intimated that his team’s lack of signings has been due to people higher up rather than his managerial decisions.

Although Leicester’s Premier League unbeaten streak now stands at five games, they only managed four league victories away from home during the whole 2021–22 season, and their lone away clean sheet came against Burnley in March.

The Foxes have lost against Arsenal on the road the most times of any team in the top league, with 35 defeats, including a 2-0 setback at the Emirates back in March after the Gunners had previously won by the same score at the King Power in October.

The Arsenal defence has been strengthened by Saliba and Zinchenko, and the team is well-positioned to earn another three points this weekend, especially if Arteta has all of his players available.

Since Leicester has a long history of losing clean sheets away from home, we may anticipate another two-goal victory for Arteta’s team in front of their home crowd.

Arsenal hasn’t preserved a clean sheet in several of its recent games. They will be troubled by the fact that Arsenal has allowed 8 goals while being scored against in 5 of their last 6 games.

Prior to this match, Leicester City had been productive offensively, scoring 16 goals in their previous six games. Although their manager Brendan Rodgers will undoubtedly view it as a positive development, Leicester City have also struggled defensively, giving up goals in 5 of those same games. 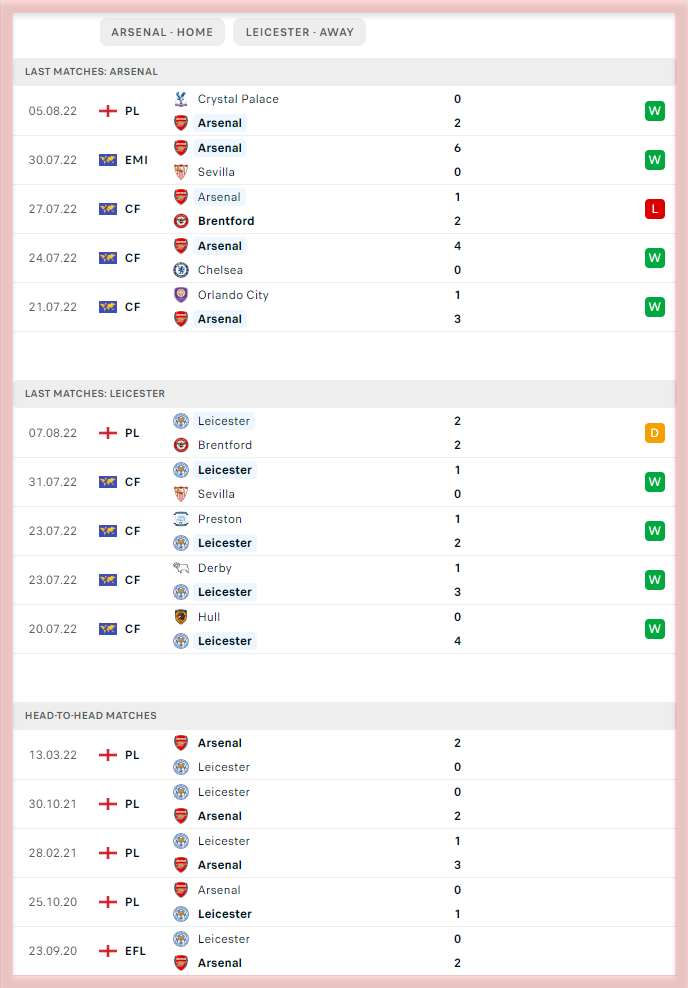