Arsenal vs Everton – Preview, and Prediction

Arsenal vs Everton – Arsenal’s Champions League qualifying is out of their hands as the Premier League season comes to a close. To finish in the top four for the first time since 2015/16, the ‘Gunners’ need Tottenham to lose at Norwich and must beat manager Mikel Arteta’s former club Everton, but they can take comfort in the fact that the ‘Toffees’ have lost 11 of their 16 visits to the Emirates Stadium, failing to win until last season.

The North London outfit, on the other hand, is faltering towards the finish line. They’ve lost five of their previous nine Premier League games without scoring, including (and most importantly) their last two games at Spurs and Newcastle, while keeping just one clean sheet in seven at home. The good news for Arteta is that his squad seems to dominate the division’s ‘lesser’ opponents, winning seven of their nine Emirates meetings against teams now in the bottom half of the table, albeit that is unlikely to be enough in their quest to return to Europe’s top table.

Everton secured their spot in the Premier League for next season with a 3-2 victory over Crystal Palace on Thursday night at Goodison Park, triggering scenes of euphoria from a relieved crowd. The ‘Toffees’ won their fourth game in a row, although they are still without key players like Yerry Mina and Andros Townsend, as well as Donny van de Beek and Ben Godfrey, who are not fit enough to start.

Given the stakes for the Champions League competition, Frank Lampard feels Everton will treat this match with the respect it deserves, although the Merseysiders have been dreadful on the road this season. They won against Leicester and drew with Watford in their last two away games, but no team has managed fewer than ten points on the road, losing a stunning 12 games in the process (W2, D4).

Arsenal top scorer Bukayo Saka has been a regular in the Premier League this season, scoring two goals and providing an assist in his previous six appearances while averaging roughly one shot on target per game. Richarlison scored against Crystal Palace on Thursday to help Everton escape the relegation zone. He now has six goals in his last nine appearances. Earlier in the season, he also scored against Arsenal.

Everton has only failed to achieve the 40-point barrier in a Premier League season once before, in 2003/04, when they finished 17th and Leeds were relegated. 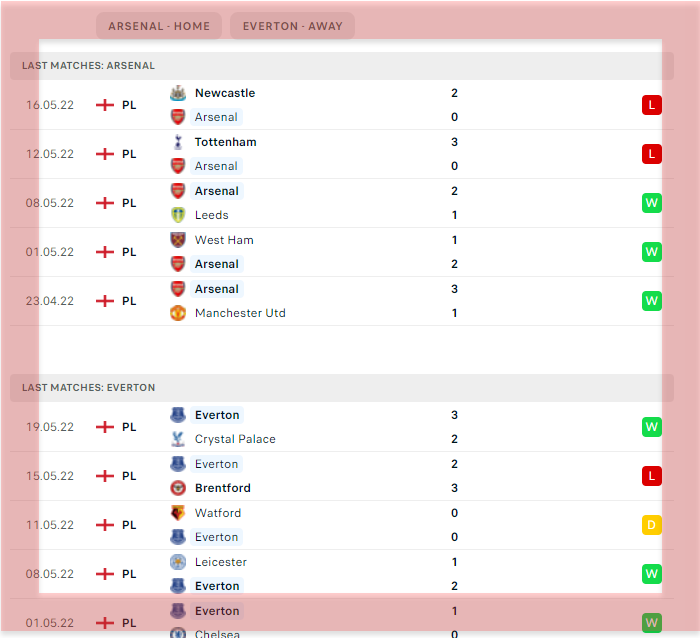