Arouca vs Portimonense – Preview, and Prediction

Arouca vs Portimonense – With only one point separating them from the relegation zone, Arouca is desperate for a win against Portimonense, who are three places above them. Today at Estádio Municipal de Arouca, the two teams will face off.

With 35 points after 31 games, Portimonense is in 11th place in the standings. In the league, they won nine times, drew eight times, and lost 14 times.

The visitors are in mixed form, having won twice and lost three times in their last five league games. If they are to win in the following games, they must enhance their offensive game.

The visitors come into the game on the back of a 1-0 league victory over Moreirense in their previous match. In recent games featuring Portimonense, there has been a trend of at least one team going scoreless.

It has happened five times in their last six games, according to a review of their stats. Arouca, on the other hand, is ranked 15th on the standings with only 27 points.

Only six of the 31 games they played resulted in a win, with nine games ending in a tie and 16 games ending in a loss. They’ve lost two of their past three games and are just one point and one spot above the relegation zone.

Arouca has recently relished playing at home, with the team being undefeated in two games. Despite their terrible home form, they would be motivated to win here to avoid relegation.

Meanwhile, Portimonense’s recent offensive struggles have continued, with the team failing to score in two of their last five games.

The hosts have an in-built objective to win this Saturday because the visitors have little motivation because they are distant from relegation and European berths. 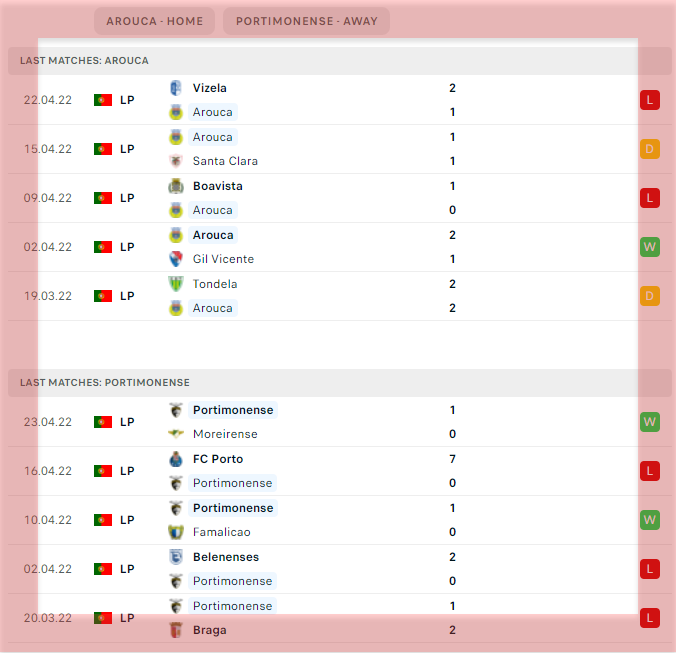