Arouca vs Belenenses – Preview and Prediction

Arouca vs Belenenses – This will be a close and competitive game between rock-bottom Belenenses and Arouca, who only need a point or a tie with the team below them, Tondela, to stay safe. This Saturday, these two teams will play each other at Estádio Municipal de Arouca.

With 30 points from 33 games, Arouca is 15th in the standings. They won the league seven times, tied nine times, and lost 17 times. The home team should win or tie this game. If they don’t, they are likely to fall into the red zone, since they have the same number of points as Tondela.

After losing to Braga 1-0 in their last Primeira Liga game, Arouca will be looking to get back on track here. In 5 of their last 6 games, they haven’t been able to stop the other team from scoring, letting in 6 goals along the way.

On the other hand, Belenenses is at the very bottom of the table, with only 25 points and the 18th spot. Out of the 33 games they played, they won 5, tied 10 times, and lost 18 times. The only way they can stay in the Primeira Liga is to win this last game of the season and hope that both Tondela and Moreirense lose.

On Monday, the visitors’ hearts were broken when they tied the game in extra time, but then Famalicao scored the game-winning goal, making the final score 3-2 and sending the visitors to the relegation zone. In their last 6 games, the team led by Franclim Carvalho has scored 8 goals.

Belenenses has won the last two head-to-head matches by 2-1. In the last 8 league games, Arouca has only won once. Four of the last five times they played, both teams scored.

Arouca needs to stay in this league, and this game is their last chance. With the home crowd behind them, we think the hosts are likely to win or tie.

Arouca vs Belenenses – Head To Head 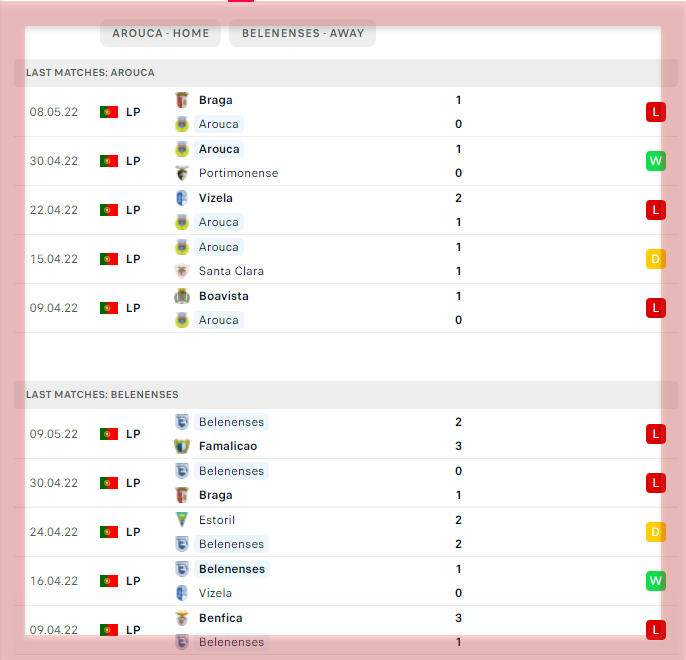