Apollon vs Maccabi Haifa – After putting on an outstanding performance in the first leg of their third-round qualifying match against Cypriot champions Apollon, Maccabi Haifa has all but guaranteed their advancement to the UEFA Champions League playoff round.

The Israeli champions dominated the field the entire time they played their match six days ago. Seven minutes before halftime, Mathieu Peybernes scored an own goal to give them a boost.

Then, early in the second half, midfielder Ali Mohamed scored twice in eight minutes while Vukasin Jovanovic was dismissed for Apollon in between. Last but not least, with a goal eleven minutes from time, striker Frantzdy Pierrot determined the outcome.

The best way to understand Maccabi Haifa’s dominance was through statistics. In the first leg, they made 21 attempts, and eleven of them were successful.

On the other hand, during the 90 minutes of play on Israeli soil, the Cypriot team failed to record a single shot on goal. In two separate 1-0 losses to Doxa and Torino, Apollon failed to score a goal, continuing their overall offensive struggles from the preseason.

On the other hand, Maccabi Haifa displayed strength by defeating Olympiakos, the reigning Greek champions, 0-4 in the return match in Piraeus, to advance to the second qualifying round.

The two teams will only have met twice head-to-head before, and  As was already mentioned, the first match took place six days ago in Israel and saw Maccabi Haifa destroy Apollon Limassol by a score of 4-0.

Based on everything we saw in the first game last week, it is difficult to predict anything other than a victory for the visitors. Each and every metric showed that Maccabi Haifa was superior to its competitors.

At 2.15 odds, you may wager on the away victory. As an alternative, we like the 1.70 odds available for the Under 2.5 goals FT pick because we believe the visitors will keep this game close after winning the reverse match 4-0. 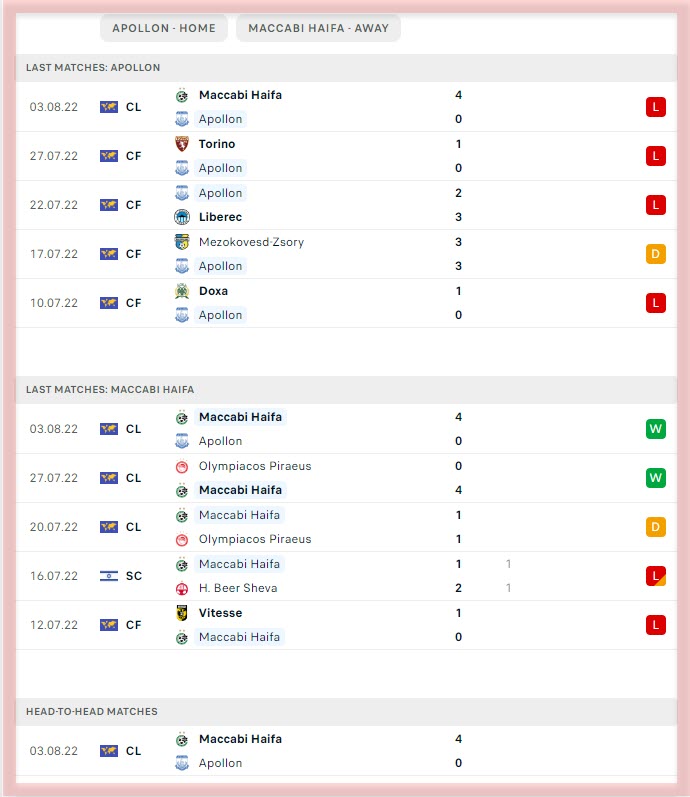