Ankaragucu vs Konyaspor – Preview, and Predictions

Ankaragucu vs Konyaspor – Ankaragucu won the 1. Lig season, finishing the previous season tied on points with runners-up Umraniyespor. It took them less than a year to return to the top echelon of Turkish football.

Ankaragucu has been quite busy in the summer transfer window, showing that they intend to remain in the first division for more than a year.

Players like Eren Derdiyok, Federico Macheda, Jese, and Pedrinho are just a few of the exciting players who make up Mustafa Antindag’s squad.

With some impressive preseason performances, Ankaragucu signalled that it will provide a serious threat in the top division.

In their previous three matches against Yeni Malatyaspor, Alanyaspor, and Genclerbirligi, they had won two and drawn one.

The playing style manager Altindag would like in the next campaign may be inferred from the fact that Ankaragucu scored three goals in each of their last three exhibition games.

We are eager to see their matchup against Konyaspor on Monday since they are equally talented in the final third.

With a third-place result in the previous Super Lig season, Konya stunned everyone. According to their preseason form, they have no intention of stopping there.

5-0 on aggregate, Konyaspor destroyed BATE of Belarus in the second round of the UEFA Europa Conference League qualifying matches.

From their past three head-to-head encounters, the teams have each recorded a victory, a draw, and a defeat. Less than three goals were scored in six of the previous seven head-to-head contests between these two teams.

Ankaragucu’s last 18 home matches against Konyaspor resulted in 10 victories, 3 draws, and 5 defeats. We doubt either Ankaragucu or Konyaspor will retain a clean sheet when they face off against each other because both teams have been scoring goals for fun during the preseason.

Since Konyaspor has a busy schedule in addition to their Conference League match against Vaduz in the third qualifying round, we will go with the Both Teams To Score option at the 1.72 odds, while the more daring bettors may try their luck betting on the home team to win at the ridiculous 3.20 odds. 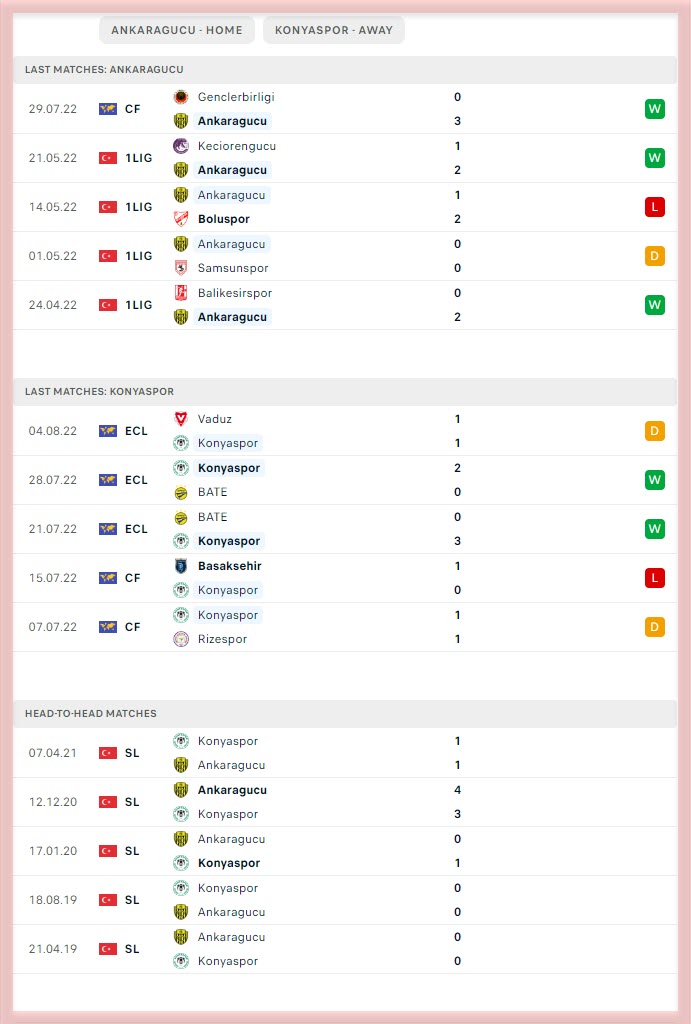