Andorra vs Latvia – Preview, and Prediction

Andorra vs Latvia – Latvia is positioned first on the standings and is unquestionably the best squad there. They have a perfect winning record up to this point and are the favourites to defeat struggling Andorra this Sunday and pick up three points.

Andorra is currently ranked second-to-last in the standings and has only picked up one victory. And this lone victory was over Liechtenstein, who was ranked very last. Take note that Liechtenstein’s record is now 100% losing.

The Andorrans also scored the fewest goals and gave up the most goals in the group, excluding the club that finished dead last. Additionally, it should be mentioned that they have mathematically eliminated getting the top spot and moving up to Group C.

The first position is now being held by the Latvians. They now hold a perfect winning record, the most goals scored, and the fewest goals allowed. In addition, they have a strong head-to-head record against this opponent throughout the years.

Considering all of these facts, Latvia is expected to win on Sunday. Additionally, a victory this weekend will put them at the top of the standings, resulting in promotion to Group C.

Latvia prevailed 3-0 in the most recent match. In the previous eight games, they had won five of them. They haven’t lost yet, and they’ve won all of their games. In three of their previous six games, they scored three goals or more.

Andorra had lost 43 of their previous 50 games overall and had three distinct losing streaks of eight, five, and six games during that time. Additionally, they have conceded two or more goals in 12 of their last 22 games overall.

Also keep in mind that since 2017, they have only been able to win five games at home. The Latvians, on the other hand, have won their last five games and have scored ten goals in their last four games. They have also gone eight games without losing.

Additionally, they have a four-match winning streak away from home and a six-game unbeaten road run. This information, together with previous head-to-head meetings, suggests that Latvia will win this weekend at Estadio Nacional.

Andorra vs Latvia – Head -to- Head 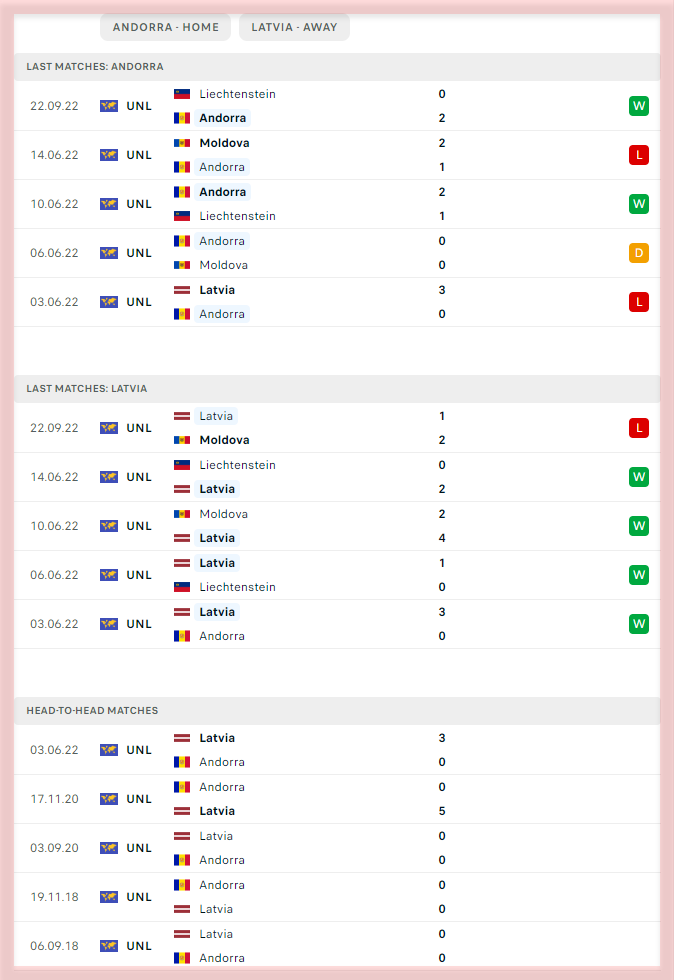