Anderlecht vs Union Saint-Gilloise – After losing their first game in the Championship round, Anderlecht tied their second game and won their third. They are currently third in the league and have 36 points. With their current standing, they have a chance to get into the Europa Conference League. They haven’t lost in their last two games, and they’ll try to keep that going.

Antwerp was the last team that Anderlecht played. Anderlecht scored four goals and Antwerp didn’t score any, so Anderlecht won with a final score of 0–4 (FT).

Since the start of the Championship rounds, Union Saint-Gilliose hasn’t done well in their games. After winning the first game, the team hasn’t been able to win any of the next three. This is called a “cold streak.” The team is currently in second place in the league. They have 43 points from their games, which is only three points less than the top team. The team’s current record gets them a spot in the Champions League qualifiers.

Club Brugge was the last team USG played. Brugge won the game because they scored one goal and defended well, leaving USG without a goal. Saint-Gilliose lost the game with a score of 1-0 at full time.

The last time two teams played each other, Union Saint-Gilliose won 3-1 (FT). Union SG has won the last three head-to-head (h2h) games. Over 2.5 goals have been scored in four of the last five head-to-head games.

At the moment, Anderlecht hasn’t lost in its last two games, while Union SG hasn’t won in its last three. With the way they are playing now, USG will have a hard time beating Anderlecht.

Anderlecht has an advantage over the other teams because they play on their home ground. The team hasn’t lost in its last six games, and they will try to keep that going. Up until the Championship round, Union SG had done well on the road this season. They haven’t won in their last two away games, and they haven’t scored in those games either.

Taking a look at the teams’ records, it seems likely that Anderlecht will win because they have been doing well in recent games. Because USG hasn’t scored in their last few games, we can expect Anderlecht to win with a clean sheet. 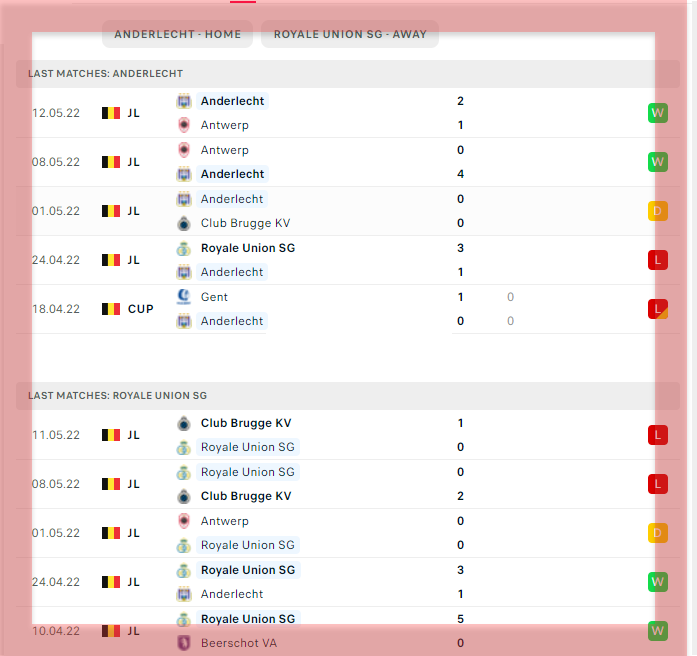