Anderlecht vs Eupen – preview and prediction – team news, and lineups

Anderlecht vs Eupen – Last month, the first leg of the Belgium Cup ended in an exciting 2-2 draw at Kehrwegstadion in Eupen after Anderlecht was granted an injury-time penalty, resulting in a stalemate. Three of the four goals were scored on penalties, and Eupen snatched a win in the final minutes. This second leg will take place at Lotto Park, where the Pandas will be seeking an away win today.

The Purple & Whites advanced to the Round of 8 after a 4-3 penalty shootout victory over Seraing. They, therefore, went to the Quarterfinals, where they defeated Kotrijk by a score of 3 goals to nil. The first leg of the Semifinals between Anderlecht and Eupen ended in a draw.

The hosts are still in fourth place in the Jupiler Pro League after going undefeated in their last four league games. However, they were held to a 0-0 draw by Leuven in their most recent match. Only 5 of the 29 games played in the Championship Group zone have resulted in a loss.

Eupen, on the other hand, had a round of 8 encounters against Warengam, which ended 3-2 after extra time, and the Pandas advanced to the quarterfinals against KV Mechelen, who had previously upset Cercle Brugge. In the end, the visitors won 3-1, qualifying them for the first leg of the semi-finals against Anderlecht.

There have been 11 league games in which the visitors have been denied a win. They, on the other hand, drew the final match against table-toppers Royale Union SG with no margin for error. They are third from the bottom of the First Division A table with only 28 points.

Eupen hasn’t won on the road in their last four games, while Anderlecht has recently won back-to-back home games. Given a result, we believe a home win is likely on Thursday, as the visitors have lost seven of their 15 road games this season. 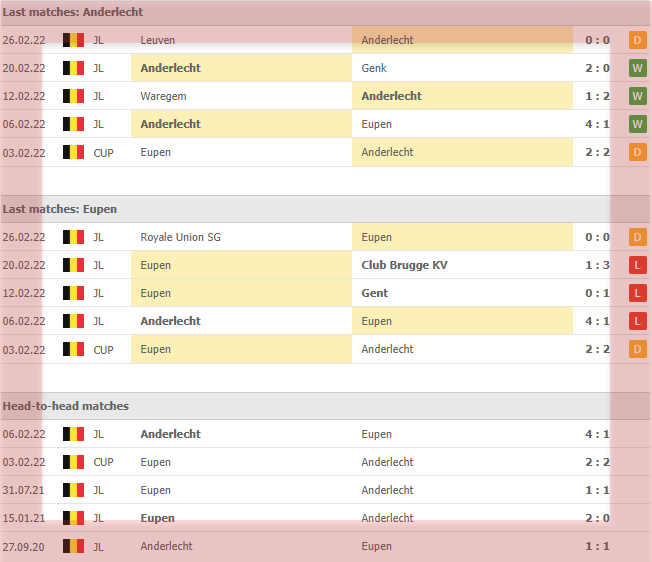