Anderlecht vs Club Brugge – Club Brugge, the defending champions, will visit Anderlecht, who are currently fourth in the league, in Round Two of the Championship. This Sunday, these two teams will face off at Lotto Park .Club Brugge comes into this match on the back of a 1-0 First Division A Play-Off victory over Antwerp. They have won each of their last six games in all competitions, as well as all nine games in the Belgian Pro League.

Club Brugge has scored 17 goals in their last half-dozen matches. On each of those occasions, they have also scored. The visitors’ momentum is mounting, as they have now gone nine games without losing. Anderlecht, on the other hand, lost 3-1 at Union Saint-Gilloise, the table toppers, on Sunday. That was their second consecutive setback, following their loss on penalties to Gent in the Belgian Cup Finals. Vincent Kompany’s team, on the other hand, has won each of their last six home games in all competitions. In their last six games, the hosts have scored a total of ten goals. In those same games, they’ve given up a total of seven goals. Anderlecht have won their previous five home games, proving that they are still a difficult team to beat at home.

Anderlecht has won all five of their previous games with Club Brugge. They have drawn the last four head-to-head meetings, the most recent of which was conducted in December and finished in a 2-2 tie. They’ve even won the last five games they’ve played in their own stadium.

Meanwhile, Club Brugge has been in incredible form away from home, winning their last five games and being undefeated in their previous six league away trips. The pressure will be on Blue-Blacks, as Royale Union SG are expected to increase their lead from the earlier game, which might decide the title if the visitors drop points. 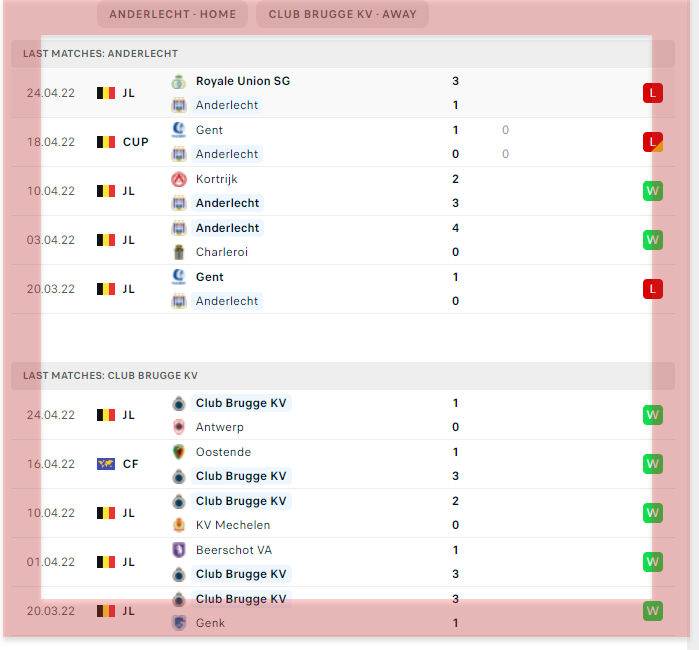