Albania vs Armenia – Preview, and Predictions

Albania vs Armenia – Albania and Armenia, who won’t be in the 2022 World Cup, will play a friendly on Saturday in Tirana. The Red and Blacks have won only one of their last seven home matches, while the Mountaineers have lost all 11 of their away encounters.

Albania finished third in Group I of UEFA qualifying, two points behind Poland. The Red and Blacks won six of their 10 qualifiers, including a 1-0 home triumph over Andorra, their only victory in their last 13 international fixtures.

Edoardo Reja’s team only won two of 12 possible points in their UEFA Nations League group, but they survived relegation to League C as Russia was ejected amid the Ukraine war.

Albania has lost their previous three friendlies, including Wednesday’s 3-1 loss to Italy. Ardian Ismajli put the Red and Blacks ahead, but Giovanni Di Lorenzo and Vincenzo Grifo equalized for Italy.

Reja and co will be sure of winning on Saturday because they’ve won their last three games with Armenia, scoring twice each time. Armenia has won only two of its last 18 international matches in all tournaments, like Albania.

Two 1-0 home victory over Montenegro and Ireland early last year were sandwiched by a 9-0 away loss to Norway, their worst since independence in 1991.

Joaquin Caparros’ team placed fourth in their UEFA World Cup qualification group and were demoted to League C of the Nations League in September after one win and five losses.

Armenia ended a four-game losing slide with a 2-2 draw against Kosovo on Wednesday, but they would have won if not for a 93rd-minute penalty.

The Mountaineers haven’t won in 2022 after 10 chances, but Saturday’s game against Albania is a fantastic chance to close the year on a high.

Armando Broja withdrew after injuring his ankle in Wednesday’s loss to Italy. Myrto Uzuni has also returned to Granada, therefore Xhuliano Skuka will start in attack alongside Tedi Cara or Ernest Muci, both with one cap.

Artak Dashyan could be joined in midfield by Sergey Mkrtchyan, who made his international debut against Kosovo. Elseid Hysaj, Marash Kumbulla, and Keidi Bare all started against Italy and should play again on Saturday.

Varazdat Haroyan and Kamo Hovhannisyan are two of Armenia’s most experienced players and are slated to start with Styopa Mkrtchyan and Hakob Hakobyan. 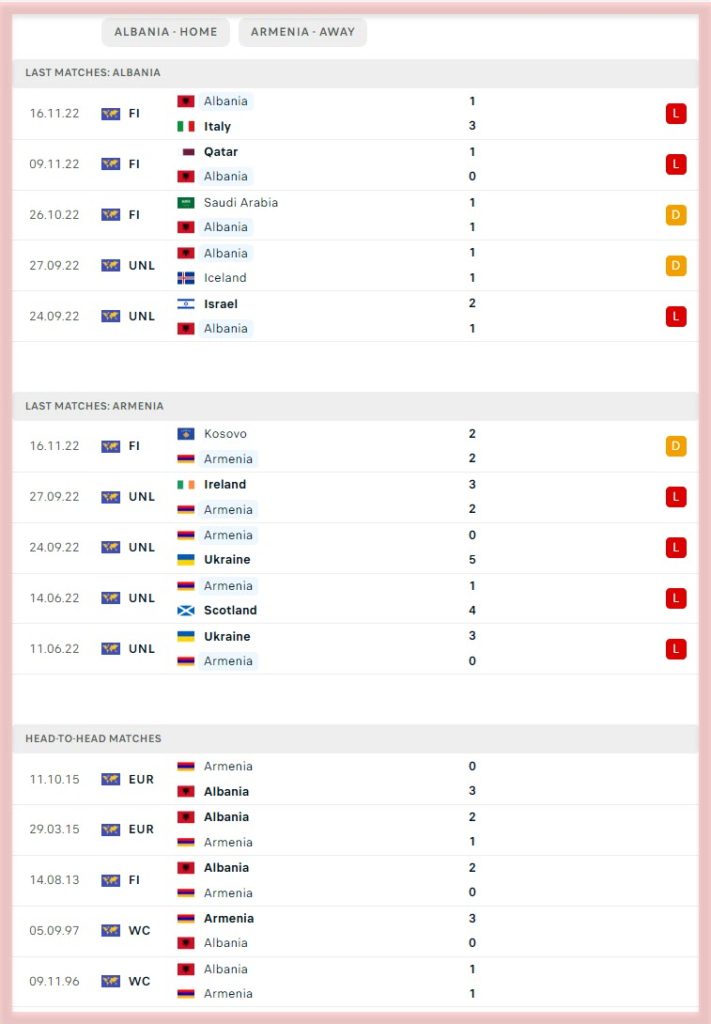