Alanyaspor vs Gaziantep – Preview, and Prediction

Alanyaspor vs Gaziantep – Alanyaspor’s winning mindset appears to have returned in recent encounters. They’ve won their previous two games, snapping a three-game losing slide. The team has six wins and four losses in its previous ten games. With 58 points from six matches, the hosts are now in fifth place on the table. The squad still has a chance to compete in the Europa Conference League playoffs with two games remaining.

After their last match against Adana Demirspor, Alanyaspor added another victory to their record. Alanya scored two goals in the encounter, while Adana only managed one, resulting in a 1-2 FT result.

Gaziantep FK has struggled in their games this season, as the team has remained in the bottom part of the league table. The club has one victory, four ties, and five losses in its previous ten games. Gaziantep is in 16th place in the league rankings with 43 points. Gaziantep’s last match was against Kayserispor. Both clubs scored one goal apiece, and the game ended in a 1-1 FT draw.

Gaziantep’s poor performance will be a detriment for the squad in their forthcoming match against Alanyaspor. Alanyaspor has won its past two matches in a row, while Gaziantep has not won in their last six.

In recent home encounters, Alanyaspor has had wins and losses one after the other. Over 2.5 goals have been scored in four of the last five meetings, with Alanyaspor scoring over 1.5 goals in four of them. Gaziantep, on the other side, has lost its previous six away matches in a row.  Alanyaspor are the clear favourites in this match, with a better chance of winning than Gaziantep FK. Both clubs have scored in recent encounters and are likely to do so again in this one. 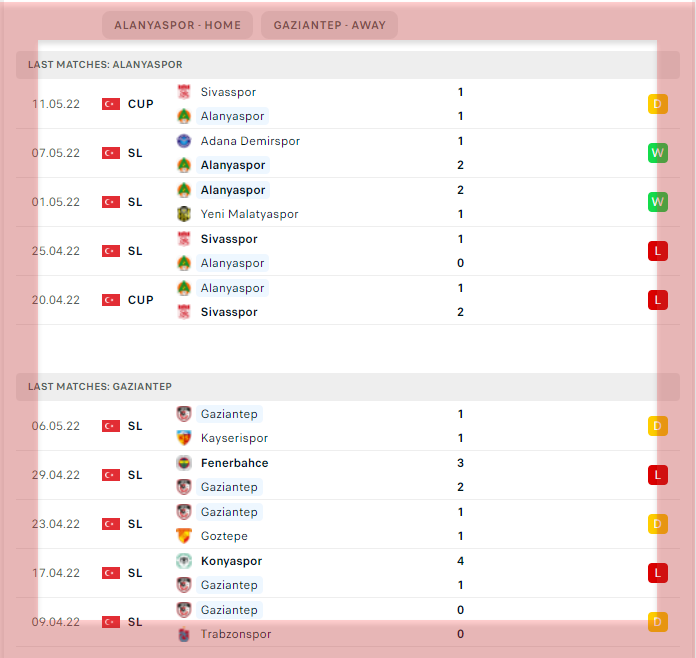