Akranes vs Hafnarfjordur – Preview, and Prediction

Akranes vs Hafnarfjordur – Tuesday’s match between Akranes and Hafnarfjordur is the 10th matchday of the Besta deild karlais, which both sides are striving to avoid relegation from the division. At Akranesvöllur, fans may expect a showdown between these two rivals.

Hafnarfjordur has 8 points from 9 games and sits in ninth place in the standings. They each won and drew twice while losing five matches. With just four more points needed to escape the relegation zone, the visitors are within striking distance of safety despite a recent run of defensive mistakes.

Hafnarfjordur and Leiknir played to a 2-2 draw in their most recent league meeting. Last four games in which they played concluded with at least one goal being scored by each team. It’s probable that we’ll see some goals here.

Akranes, on the other hand, sits at the bottom of the table with just seven points. They’ve won just once in nine games, drawing four and lost four. A huge chunk of their season’s misery has been brought on by their abject defensive play. The hosts have let up 20 goals so far.

The hosts drew an astonishing 3-3 draw with KR Reykjavik in their previous match. As a result, Akranes has suffered three straight league defeats at home, two of which featured three or more goals. In addition, they had only won one of their previous eight games in a variety of competitions.

Hafnarfjordur racked up a combined 7-0 win-loss record in their last two away league contests. There have been three draws and four defeats for Akranes in their past seven games.

They’ve also dropped their last three home games by allowing a total of ten goals. Even on the road, the hosts have been beaten 3-0 and 4-0 in their last two league meetings.

Hafnarfjordur, however, are still without a road point, but this might be the game that breaks the ice. They have a stronger head-to-head record against this opponent despite losing their last four away league games.

Akranes vs Hafnarfjordur – Head -to -Head 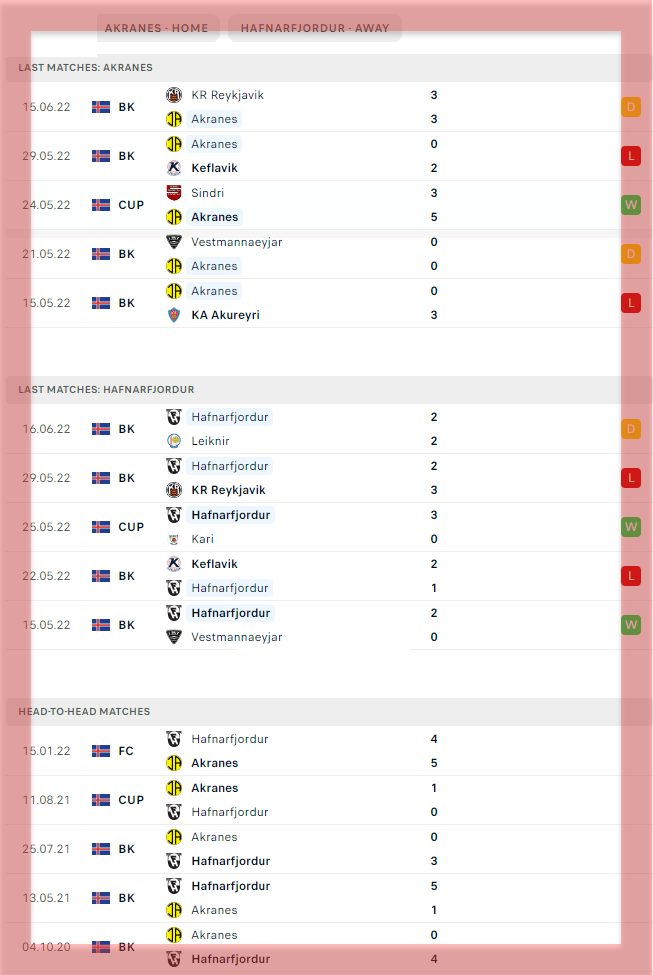