Ajax vs Cambuur – Preview and Prediction

Ajax vs Cambuur – When Ajax plays Cambuur at home in the fifth round of the league on Saturday afternoon, they will have an excellent opportunity to continue their unbeaten start to the current Eredivisie season. Cambuur will be Ajax’s opponent in this round.

Despite displaying symptoms of vulnerability throughout the preseason and especially in the loss to PSV Eindhoven in the Super Cup, the club captained by Alfred Schreuder was able to clinch all four victories in the opening four rounds of the competition.

The recent improvements in his team’s defensive showing were especially pleasing to the new manager, Schreuder, who was pleased overall with the team’s performance.

Ajax earned victories on the road against Sparta Rotterdam and Utrecht in the previous two rounds, and maintained consecutive shutouts in each of those victories.

In the game that they won 0-2 away at Utrecht the previous weekend, they exercised perfect control over the events that occurred on the field. During the entire match at Stadion Galgenwaard, their opponents were only able to get one shot on target.

When playing against Cambuur, who have failed to score in three of their first four matches, the home team is a large favourite in this matchup. They were dealt a cruel blow when they allowed AZ Alkmaar to score an untimely goal in the 90th minute of their encounter at home, which resulted in a close 0-1 loss for Cambuur.

Cambuur played the final 30 minutes of the match with ten players on the field. We are concerned about the chances that Henk de Jong’s team will be able to keep things tight at the back here against the most lethal offensive in the country given that they allowed 35 goals in 17 away matches during the last Eredivisie season.

When Cambuur travelled to Johan Cruijff Arena for the final time in September of the previous year, they were defeated 9-0 and it was an awful performance.

Ajax has a remarkable 28-5 advantage in goal differential as a result of their seven most recent home encounters against Cambuur, of which they have won six and drawn one. Six of the last seven head-to-head matchups between these two teams have produced at least three goals for both sides to score.

When taking into consideration the fact that Cambuur have failed to score in three of their first four matches of the current Eredivisie season, betting on the home team to win 1-0 with no goals scored appears like a fantastic option here at odds of 2.00. Another choice that has a very low chance of going wrong is betting on Ajax to win with an Asian Handicap of -2.5 at odds of 1.75.

Ajax vs Cambuur – Head -to- Head 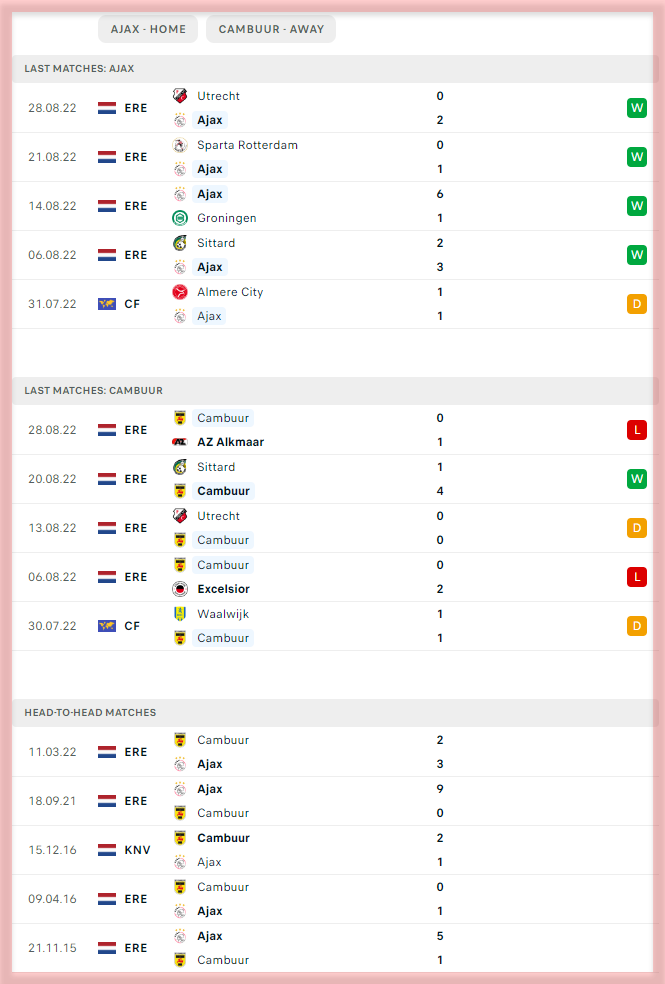