AJ Auxerre vs Marseille -After losing to Lyon 2-1 in their previous match in Ligue 1, AJ Auxerre will be seeking to improve on that performance here.

AJ Auxerre had 38% of the game’s possession and 2 of his 6 shot attempts were on goal. Mattias Autret (80′) was the lone player for AJ Auxerre to get a goal.

Lyon made 20 attempts at goal, eight of which were successful. Karl Toko Ekambi (72′) and Tetê (29′) both scored goals for Lyon.

AJ Auxerre have been consistently scoring goals, finding the back of the net in each of their previous 6 contests. They have totaled 8 over that time, and have given up a total of 10.

Putting aside previous outcomes, it remains to be seen if that trend will hold in the upcoming match. Marseille will enter this match off of a 1-0 victory over Clermont Foot in their previous matchup in Ligue 1.

Marseille controlled 60% of the game’s possession and 7 of its 21 shots on goal were successful. Pape Gueye (49′) was the lone scorer for Marseille. Clermont Foot attempted three shoots, but none were successful.

Marseille have scored a total of 15 goals in their last 6 meetings. Marseille has scored in each of those contests without exception. Their defenders have witnessed three goals scored by their opponents during that time.

Given that the team is nearly at full strength, there is only one fitness worry for AJ Auxerre manager Jean-Marc Furlan, which results in a low absence rate. Due to a torn knee ligament, Théo Pellenard will not play.

Our recommendation is for AJA to play this match in a 4-2-3-1 formation with Benoit Costil, Brayann Pereira, Jubal, Alexandre Coeff, Gideon Mensah, Kays Ruiz-Atil, and Nuno da Costa getting the start.

Igor Tudor, the manager of Marseille, only has one fitness concern out of a group of players that is largely at full strength. Gerson is unable to play in this game due to ankle issues. 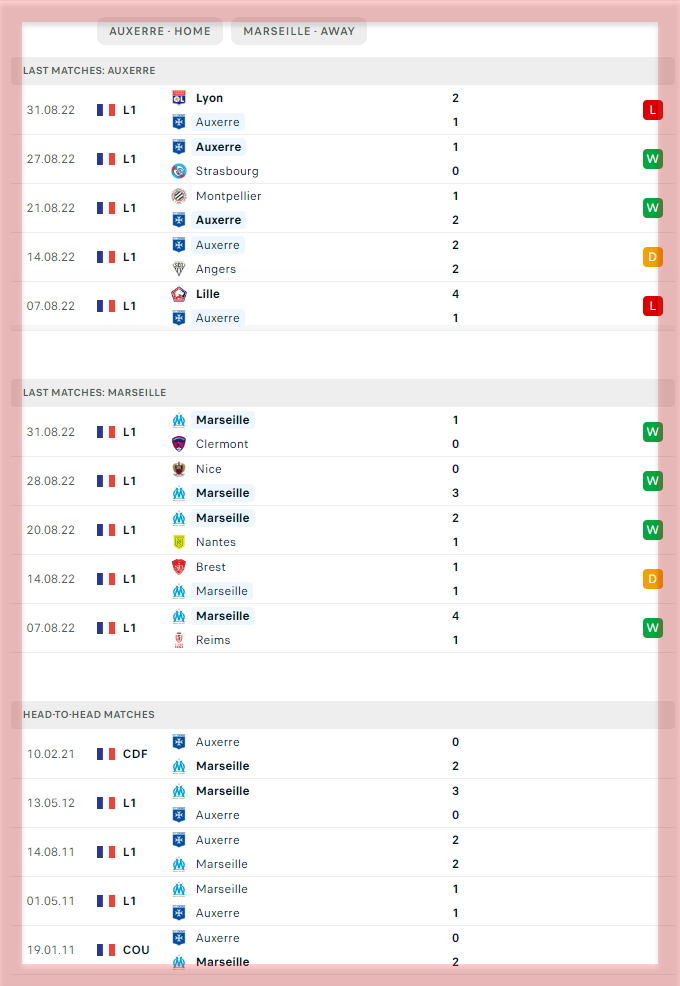