AIK vs Sirius – Preview, and Predictions

AIK vs Sirius – The league leaders AIK Stockholm host the mid-table Sirius at Friends Arena on Saturday in Round 9 of the Swedish Allsvenskan.

With 19 points after nine games, AIK is in first place in the Allsvenskan. In the league, they won six times, drew once, and lost twice.

Their records this season have been mainly positive, and they are in great spirits after their recent league performance. They score goals reasonably, but they concede nearly as many.

Following a 3-3 league tie against Hammarby, the hosts will participate in this match. AIK hasn’t been able to stop scoring goals recently, scoring in each of their last six games.

During that period, they’ve managed to score 10 goals while surrendering three. Sirius, on the other hand, is ranked eighth on the standings with 13 points.

They won four of the eight league matches they played, drew once, and lost three times. They had a lot of trouble keeping things quiet in the back at the start of the season, but they’ve recently regained some momentum.

Sirius comes into this match fresh off a 2-0 league win against Elfsborg the week before. Recently, there has been a trend of at least one team failing to score in games in which they are involved. It has happened six times in their last six appearances, according to their schedule.

AIK has won nine of their last ten Allsvenskan games. Sirius has never beaten this opponent in any of the previous competitions. Their most recent league meeting finished in a 4-2 victory for the hosts.

AIK has won their previous five home league matches in a row, keeping a clean sheet in the process. They’ve also won all of their home h2hs in the league.

Meanwhile, Sirius has never beaten this opponent in any of the previous competitions. They’ve also lost two of their past three league road games.

Aside from their overwhelming h2h advantage, the hosts have won all of their home games this season without surrendering a single goal. As a result, we expect a home victory on Saturday. 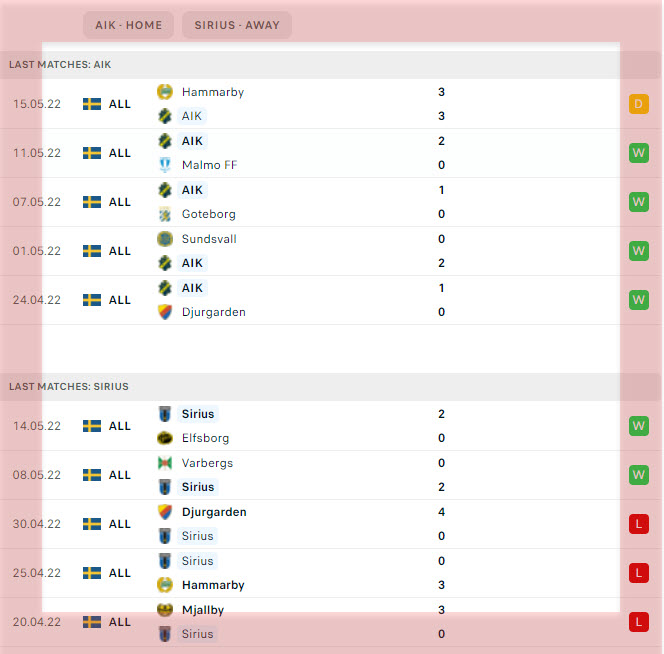