AEK Larnaca vs Dynamo Kyiv – After losing to APOEL by a score of 1-0 in the First Division’s last match, AEK Larnaca will be hoping for a better outcome in this contest. APOEL scored thanks to Anastasios Donis (41′).

In previous years, AEK Larnaca hasn’t consistently been able to hold out for 90 minutes. According to the data, AEK Larnaca’s defence has been exposed in 5 of their last 6 matches, leading to the leakage of 8 goals.

Putting that aside, only time will tell if this match will see a repeat of the trend. In their most recent match, Dynamo Kyiv and Vorskla Poltava tied 1-1 in the Premier League.

Vitaliy Buyalskyi (33′) was the lone player listed for Dynamo Kyiv on the scoresheet. The score was scored by Vladen Yurchenko for Vorskla Poltava at 44′. Dynamo Kyiv, led by Mircea Lucescu, have scored seven goals in their last six games, averaging 1.17 goals scored per game.

José Oltra, the manager of AEK Larnaca, will be without Bruno Gama and Andreas Paraskevas due to surgeries on their Achilles tendons and cruciate ligaments, respectively.

Due to his suspension, Angel Garca will not be allowed to participate in this game. Mircea Lucescu, the manager of Dynamo Kyiv, is currently worried about some player fitness. 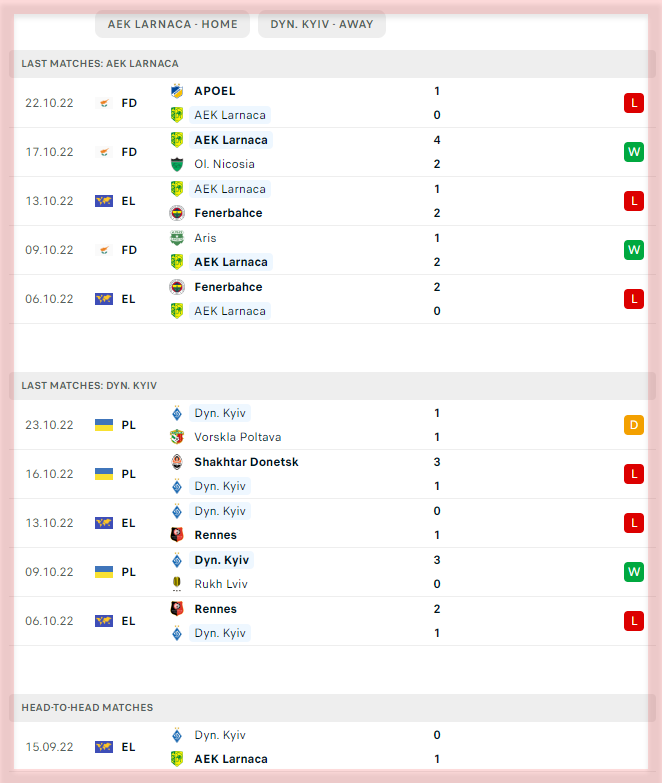