In the meantime, the hosts are in third place, three points ahead of their opponents heading into Monday’s match.

When Adana Demirspor takes on Besiktas on Monday, they have a chance to win their third consecutive league match, with the hosts seeking to continue their remarkable goal-scoring run.

Adana Demirspor strolled to a comfortable away victory against Rizespor last weekend after smashing Fatih Karagumruk 5-0.

Besiktas will look to extend their unbeaten record in all competitions to eight games, but they remain outside of the European places.

They are in seventh place going into Monday’s game, with three points separating them from the top four.

Besiktas drew 0-0 with Antalyaspor last Saturday, and they were held to another goalless draw in the Turkish Cup in midweek.

Tarik Camdal has missed the last four games for Adana Demirspor due to injury, and he is anticipated to miss Monday’s match as well.

For the cup tie, Vincenzo Montella made a few changes, but the lineup on Monday will be similar to the one that started the league match against Rizespor.

Balotelli, who has scored the most goals for his club in the league this season, will be one of Adana Demirspor’s biggest goal threats.

After collecting a red card last weekend, Miralem Pjanic will be sidelined for Monday’s match.

Rachid Ghezzal was inserted into the starting lineup for the midweek cup match, and he is anticipated to play again on Monday.

Michy Batshuayi, who has nine goals in the Turkish Super Lig this season, will be the away team’s major goal threat. 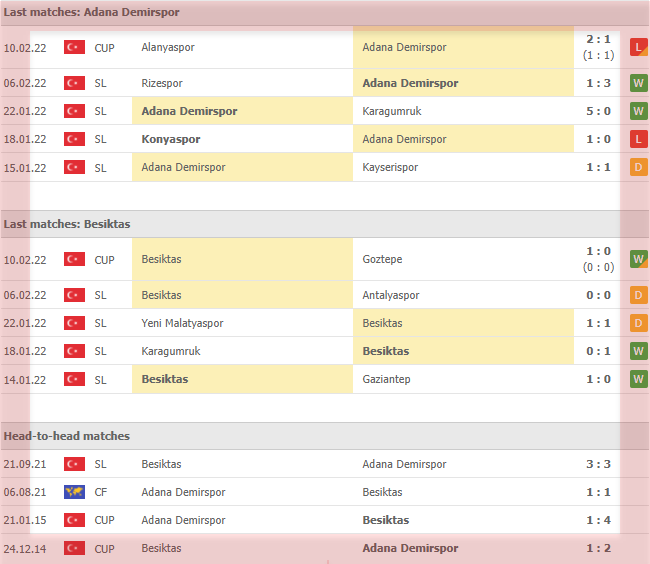