Accrington vs Gillingham – preview and prediction

Accrington vs Gillingham – Gillingham is on the verge of relegation after suffering their 19th defeat in the league. They are only a point away from relegation and continue to be an inconsistent team in League One.

Accrington Stanley have not won in their last two games and are level on points with Cheltenham Town in the middle of the table. Both teams are separated by 16 points, which will be changed tomorrow at The Wham Stadium in Accrington.

With 50 points from 38 games, the home team is 13th in the standings. In the league, they won 14 times, drew eight times, and lost 16 times. They scored 47 goals while allowing 63, demonstrating that their defense is far from perfect.

Accrington Stanley will be hoping to bounce back here after a humiliating 0-4 League One loss to Plymouth Argyle. They have been scored against in all six of their previous games, surrendering 14 goals in the process.

Gillingham, on the other hand, is ranked 20th in the table with only 34 points. They won only seven of the 39 games they played, drawing 13 and losing 19 others.

The Gills’ last game was a goalless draw with Sheffield Wednesday. The visitors’ strike force has only scored three goals in their last six games, while their opponents have scored four in the same time period.

Prior to this match, the visitors had not lost to Stanley in the previous four league games played away from home. We expect Accrington to win at home this weekend, as they have won their last four home games in a row and are on a nine-game unbeaten run at the Wham Stadium. 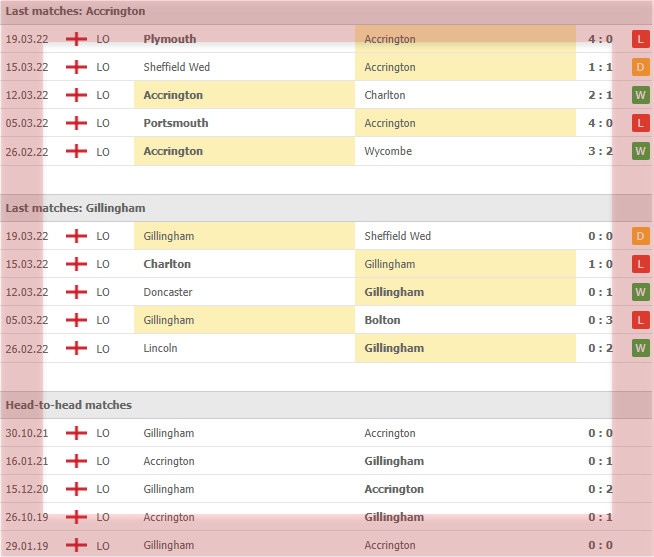