AC Milan vs Atalanta – After a 3-1 win at Verona last weekend, AC Milan is four points away from securing the Serie A (SA) title for the first time since 2011/12, when they reached 80 points in one season. They are two points ahead of rivals Inter Milan after four straight league wins and no SA defeat since January 17 (W9, D5) as they host European-chasing Atalanta.

Milan will approach the remainder of the season as if it were two cup finals, and they’ll need to lift their game because they haven’t won a home H2H since January 2014 (D4, L3), with five of those games ending in a 0-0 draw. After keeping five consecutive clean sheets at home (W3, D2), even a blank – assuming they don’t concede again – wouldn’t be a disaster. In reality, a tie here, along with Inter’s loss on Sunday evening, would give Milan the title.

Atalanta, on the other hand, have their own ambitions and are one of four teams vying for the three remaining Europa League/Europa Conference League spots, but they must catch up to Lazio, Roma, and Fiorentina. They must do so by expanding on their four-game winning streak (W2, D2), which has resulted in an entertaining average of 4.5 goals per game!

They’ll remember a 3-0 triumph here in January 2021, and they’ve also scored three goals in each of their last two league away games, winning both by a score of 3-1. Their propensity to score on the road is undeniable, but with only one clean sheet in their last six SA away games (W3, L3), they’ll need to improve defensively if they want to win.

Milan’s Sandro Tonali scored twice against Verona on his 22nd birthday and also scored in the reverse fixture in October, while Luis Muriel has scored in each of Atalanta’s previous three league away games, twice netting the game’s third goal ,Between halftime and the 60th minute of Milan’s home league games this season, only one goal has been scored. 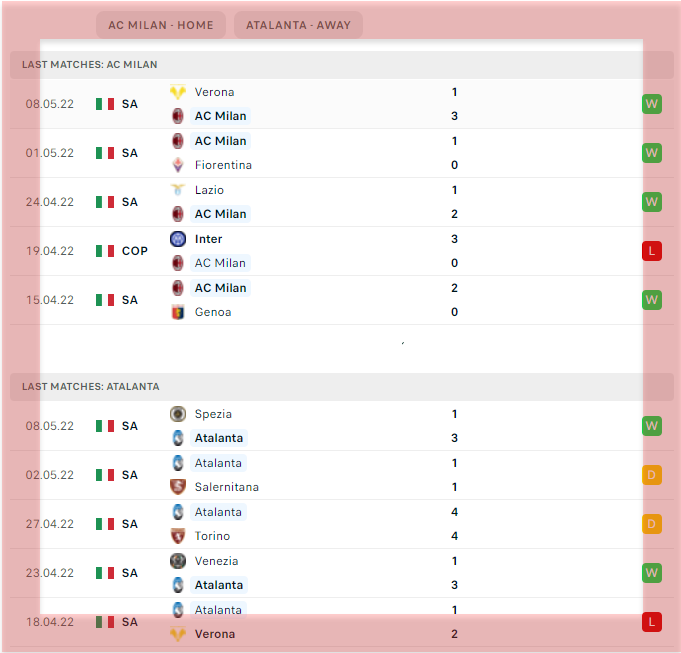